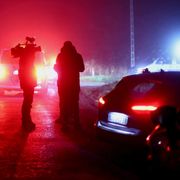 A deadly missile blast in Poland marks the first time Russia’s war in Ukraine has struck NATO soil in a serious test for the alliance.

But – judging by initial indications – the crisis does not look set to be the trigger for direct military conflict between NATO and Moscow.

Instead, it underlines the inherent risk of the Ukraine war drawing in NATO by accident – through a mistake or a miscalculation by Russia.

US President Joe Biden has said it was "unlikely" the missile was fired from Russia, while the Associated Press news agency has quoted US officials saying it could have been fired by Ukraine, attempting to intercept a Russian airstrike against its territory.

The Polish president has so far said his country has no conclusive evidence as to who fired the missile and that the strike appeared to have been a one-off incident rather than an ongoing threat.

All-out war with Moscow is the last thing NATO wants, but allies will likely seek to respond in some way to Tuesday’s explosion, which left two people dead.

In a first step, they will hold emergency talks on Wednesday morning at their headquarters in Brussels, with Poland set to request consultations under Article 4 of the NATO treaty.

Article 4 allows for an ally that feels threatened to discuss its concerns and any possible action.

The scale of the reaction will depend on what happened, why, and what kind of message the 30 member states want to send to Russian President Vladimir Putin.

NATO has so far sought to avoid confrontation ever since Russia launched its full-scale invasion of Ukraine, which is not part of NATO, in February.

But the alliance has also been alert to the possibility of Russia seeking to test allied resolve by deliberately targeting its territory or accidentally harming a member state – such as Poland – that shares a border with Ukraine.

NATO forces will have war-gamed possible scenarios and how best to respond.

It means, once there is clarity about what went on, the reaction from NATO will likely be rapid. But it will require consensus.

Read more:
Missile strike on Poland may be deliberate attempt to test NATO – but overreacting risks dangerous escalation
What NATO Articles 4 and 5 say – as Russia accused of missile strike on member state

If the explosions at Przewodow, a village in eastern Poland, close to the border with Ukraine, appear to have happened by mistake or as the result of Ukrainian air defence systems blasting Russian missiles out of the sky, the allies could choose to bolster their own defences further rather than go on the offensive.

If, as seems far less likely, it is established that Russia deliberately launched missiles at Poland, Moscow will have knowingly crossed a red line.

Allies have made clear that they will strike back if any part of NATO is attacked. This could even mean invoking Article 5 of the alliance’s founding treaty, which declares that an attack on one is an attack on all and could see NATO allies retaliate with military force.

The threat of an armed response to any armed attack is the cornerstone of the alliance’s ability to defend itself and its interests.

An attack by Russia against Poland would be a deliberate test of this resolve.

NATO will need to balance demonstrating that such action will not be tolerated and must never happen again, with the need to prevent triggering a wider war between two nuclear-armed opponents.