Poland: 10 miners missing after underground tremor at coal mine 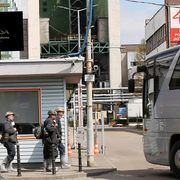 Contact with 10 miners has been lost following an underground tremor and methane gas discharge at the Borynia-Zofiowka mine in the south of Poland, coal mining officials have said.

The incident, which occurred 900m underground at 3.40am on Saturday morning, is the second mining accident to take place in the last four days around the town of Jastzebie-Zdroj, near the Czech border.

Prime minister Mateusz Morawiecki tweeted that this was "devastating news again" from the mining region.

He said his thoughts and prayers were with the missing and their relatives.

Five people were killed on Wednesday at the nearby Pniowek mine after repeated methane blasts, with seven missing and dozens injured.

The search for those missing there was suspended on Friday after new blasts injured seven rescuers.

Both mines are operated by the Jastrzebska Spolka Weglowa, or JSW, company.

A spokesperson said 52 workers were in the area of the tremor at the Borynia-Zofiowka mine and 42 were able to escape to safety via the shaft.

A 12-team rescue operation has been launched to find the remaining 10 miners.

Poland relies on its own coal and coal imports for almost 70% of its energy needs, leading to criticism from the European Union and environmental groups concerned about CO2 emissions and climate change.