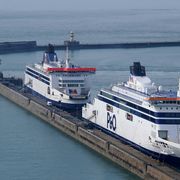 P&O Ferries plans to resume passenger sailings operating between Dover and Calais in the next few days, amid accusations that it tried to further reduce the wages of seafarers.

The shipping company has started selling tickets for its cross-Channel trips aboard its Spirit of Britain ship, with its first departure scheduled for 4.25am on Wednesday from Kent.

Passenger services are expected to restart early next week.

However, the TUC has called on freight firms and holidaymakers to boycott the company over its "appalling" treatment of workers.

Wednesday would mark the first time P&O has operated a ferry on the crucial route since almost 800 seafarers were sacked without notice and replaced with cheaper agency staff on 17 March.

Spirit of Britain was detained by the Maritime and Coastguard Agency on 12 April due to safety issues, but it was cleared to sail on Friday.

The Rail, Maritime and Transport union (RMT) earlier claimed that P&O had been stopped from "further cutting the pay of vulnerable agency crews" after pressure from RMT seafarers.

The union received reports that agency workers at Dover had been asked to sign new contracts with reduced payments, according to the BBC.

P&O, which is owned by Dubai-based DP World, reiterated that no agency workers were asked to take pay cuts.

A spokesman said: "There was an administrative misunderstanding around the contract presented to one individual who appears to have been unaware of an appendix which made clear that he would be entitled to an additional £195 a month, meaning that there was no change in his overall pay.

"There are no plans to change or reduce the wages of any of our agency seafarers and we have made clear that we will continue to comply fully with any national minimum wage obligations introduced by the UK government."

The firm has been universally condemned for its treatment of seafarers who were sacked without notice last month and it has new crews on all its vessels, though many roles are paid below the UK minimum wage – an issue the government has promised to resolve through new legislation.

That is below the UK’s minimum wage, but Mr Hebblethwaite said it is permitted under international maritime law.

Each P&O vessel must pass an inspection to return to the sea.

Until the Spirit of Britain was given the green light to sail, only the Pride of Hull, which operates between Hull and Rotterdam, and the European Causeway, which runs between Larne and Cairnryan, were allowed back into service.

TUC general secretary Frances O’Grady said the company’s gradual return to operations should be met with no customers for those services in retaliation for the mass sackings.

"P&O and DP World must not be allowed to get away with their scandalous and unlawful treatment of staff," she said.

"Companies who behave like corporate gangsters deserve far more than a slap on the wrist.

"Ministers must sever all commercial ties with P&O and its owner DP World and ensure they do not receive a single penny of taxpayers’ money.

"After their appalling behaviour P&O deserve to be given pariah status."