PMQs: Starmer asks Boris Johnson if he is ‘okay’ while accusing him of introducing a ‘working class dementia tax’ 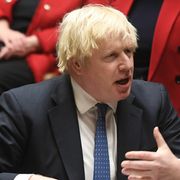 Sir Keir Starmer questioned whether Boris Johnson was "okay" as he accused him of introducing a "working-class dementia tax" through this week’s reform to social care funding.

The Labour leader said the prime minister was fronting a "Covent Garden pickpocketing operation" over the reform that means only what individuals personally pay for their social care will contribute to the lifetime £86,000 cap.

It was pushed through the Commons by a small majority after a Tory rebellion but experts have said it will mean poorer people will take longer to reach the cap than wealthy individuals so would see more of their assets eaten up by care costs.

Raising the issue at Prime Minister’s Questions, Sir Keir said: "The only thing he is delivering is high taxes, high prices and low growth. I’m not sure the prime minister should be shouting about that.

"And it isn’t just broken promises, it’s also about fairness. Everyone needs protecting against massive health and care costs.

After quizzing the prime minister a number of times on the issue, Sir Keir added: "It’s a classic con game. A Covent Garden pickpocketing operation. The prime minister is the frontman, distracting people with wild promises and panto speeches whilst his chancellor dips his hand in their pocket."

And he asked: "How could he possibly have managed to devise a working-class dementia tax?"

The PM retorted that the social care plan "does more for working people up and down the country than Labour ever did".

Mr Johnson earlier this week gave a speech to business leaders in which he imitated a car engine, lost his place and effusively praised Peppa Pig World, prompting exasperation from some senior Tories.

And on top of the Tory rebellion over social care, he has been plagued by criticism over standards after a U-turn the government performed after initially whipping Conservative MPs to reject suspending now ex-Tory MP Owen Paterson for breaching lobbying rules.

Subscribe to the All Out Politics podcast on Apple Podcasts, Google Podcasts, Spotify, Spreaker

Sir Keir used PMQs to echo a reporter’s question after the Peppa Pig speech, as he asked: "Is everything OK, prime minister?"

The PM replied: "I’ll tell you what’s not working – it’s that line of attack."

Mr Johnson used Sir Keir’s attack on him for downgrading rail plans for the Midlands and the North by saying there has been "nothing like it for a century", as he referenced a promised £96 billion investment and three new high-speed lines.

He added: "It turns out that (he) actually campaigned against HS2, said it would be devastating and said it should be cancelled."

Mr Johnson said: "I took a decision that it was the right thing to do for the long-term interests of the whole country, how can they possibly trust that man?"