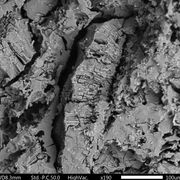 Scientists have analysed the oldest charred food remains ever found, providing the earliest evidence of plant cooking among Neanderthals.

Ancient hunter-gatherers were thought to have a largely meat-based diet, but researchers have found that prehistoric people had a diverse diet in which plants featured heavily.

Five food fragments recovered from Shanidar are the "earliest" of their kind found in southwest Asia, dating back 40,000 and 70,000 years, according to Ceren Kabukcu, a postdoctoral research associate at the University of Liverpool, who led the study published in the journal Antiquity.

The carbonised pieces of prepared plant foods include a mixture of different seeds, wild pulses, wild mustard, wild nuts and wild grasses – which could have formed the Neanderthal diet.

"They look like charred crumbs or fragments of what could be patties, thick porridge", Dr Kabukcu told Sky News.

The four remnants recovered from Franchthi are the earliest of their kind recovered in Europe, from a hunter-gatherer occupation around 13,000 to 12,000 years ago, she added.

One of the food deposits was found to be "bread-like".

The team were also able to identify the cooking tricks used by Neanderthal and early modern human chefs to make food taste better.

Pulses, the most common ingredient identified, have a naturally bitter taste, which chefs from the Stone Age quelled by soaking, leaching and then pounding or grinding them.

Pounding or grinding the food would also make it easier for the body to absorb the nutrients, as well as provide more cooking options.

The bread-like meal found in Franchthi Cave was made by grinding seeds into super-fine flour, according to the researchers, showing that hunter-gatherers developed specialised cooking practices in the Middle and Upper Palaeolithic period, tens of thousands of years ago.

In modern agriculture the bitter compounds are almost entirely eliminated, but neither the Neanderthals nor early modern human chefs were found to remove the entire seed coat, keeping some pulses’ natural bitter taste in their meals.

The findings suggest that "plants with strong flavours, some bitter, some sharp, some rich in tannins were important ingredients (or seasoning) of Palaeolithic hunter-gatherer cooking," Dr Kabukcu told Sky News, adding that "there were very ancient and sophisticated culinary traditions resting on these plant flavours" from a very early period.