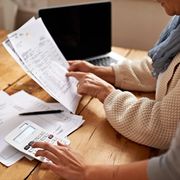 The number of people going financially insolvent in England and Wales jumped in the first quarter of this year, new figures show.

There were 32,305 personal insolvencies between January and March, the Insolvency Service said.

This was an increase of 17% when compared with the previous three months, and also 14% higher than the first quarter of last year.

Bankruptcies are often seen as a last resort.

IVAs are agreements whereby money is shared between creditors, while DROs are for people with a relatively low amount of debt but with no realistic prospect of paying it off.

As the first quarter ends in March, the figures do not include the fall-out from many of the cost of living hikes that came into effect at the beginning of April.

Millions of people in Britain are facing big increases in energy bills, council tax, and a national insurance tax rise – as well as inflation hitting a 30-year-high of 7%.

Meanwhile, pay is not keeping up – employers offered an average 4% annual pay rise in April.

Barclays and Sainsbury’s were among the businesses warning this week that they are seeing customers cutting back on spending as the cost of living crisis worsens.