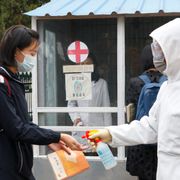 Although the size of the outbreak wasn’t immediately known, test samples collected on Sunday from an unspecified number of people in the capital, Pyongyang, confirmed they were infected with the Omicron variant, KNCA said.

The outbreak has been called the "biggest emergency incident" in North Korea on state media, with Mr Kim ordering all cities and counties of the country to "strictly lock down" their regions, with emergency reserve medical supplies mobilised.

During a ruling party Politburo meeting, Mr Kim said "single-minded public unity is the most powerful guarantee that can win in this anti-pandemic fight," KCNA said.

The first public admission of COVID infections highlights the potential for a major crisis in a country that has refused to accept international help with vaccination and shut down its borders.

The outbreak could have serious consequences because of the country’s poor health care system and its 26 million people are believed to be mostly unvaccinated.

North Korea had previously claimed a perfect record in keeping out COVID, a claim widely doubted by outside experts.

Some analysts suggest the North, by its rare admission of an outbreak, may be seeking outside aid.

To keep the virus from entering its territory, North Korea had closed its border to nearly all trade and visitors for two years, which shocked an economy already damaged by crippling US-led sanctions over its nuclear weapons and missile programme.

In January, North Korea tentatively reopened railroad freight traffic between its border town of Sinuiju and China’s Dandong, but China announced a halt to the trade last month as it deals with a spread of cases in Dandong.

According to the latest data from the World Health Organisation, 64,207 of North Korea’s more than 24.7m people received COVID testing; all had been found negative as of 31 March.

The country has so far shunned vaccines offered by the UN-backed COVAX distribution programme, suggesting no civilians may have been vaccinated, possibly because those have international monitoring requirements.

A South Korea-based website that monitors activities in Pyongyang said this week that residents have been told to return home and remain indoors because of a "national problem" without offering details.