‘No return to austerity’, says chancellor but hints at public pay freeze 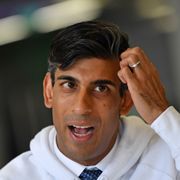 Rishi Sunak has told Sky News there will be no return to austerity in his upcoming spending review, but hinted at a future public pay freeze.

Speaking to the Sophy Ridge on Sunday programme, the chancellor said any wage settlements needed to be considered "in the context of the wider economic climate".

However, Labour has warned a cap on public sector pay would be "a kick in the teeth" for frontline workers who provided support through the coronavirus pandemic, while unions have argued it would be "morally obscene" and have not ruled out out the threat of strike action.

The growing row comes as Mr Sunak is due to unveil a £100bn plan for long-term infrastructure investment and a £3bn package of new funding to support the NHS in recovering from the COVID-19 crisis.

However, ahead of his spending review on Wednesday, he has also warned over the state of the nation’s finances and the need to get them back on a sustainable footing.

The latest official figures show public sector debt stood at at £2.076trn by the end of October – bigger than the entire UK economy.

The chancellor told Ridge: "You will not see austerity next week, what you will see is an increase in government spending, on day-to-day public services, quite a significant one coming on the increase we had last year.

"So, there’s absolutely no way in which anyone can say that’s austerity, we’re spending more money on public services than we were."

He said that he "cannot comment on future pay policy", but added: "When we launched the spending review I did say to departments that when we think about public pay settlements I think it would be entirely reasonable to think of those in the context of the wider economic climate.

"I think it would be fair to also think about what is happening with wages, with jobs, with hours, across the economy when we think about what the right thing to do in the public sector is."

But Labour’s shadow business minister Lucy Powell told Ridge: "Of course it would be morally absolutely a kick in the teeth, wouldn’t it, for all those frontline workers who helped support us through this pandemic from the bin collectors to those working in public health, in the mortuaries, the fire fighters and so on.

"It would be an absolute kick in the teeth for them after what has been an horrendous few months and might still be a difficult few months to come."

Also appearing on Ridge, Frances O’Grady, head of the TUC federation of trade unions, said: "There’s still time for the Government to step back and I would encourage them to think again, this is not smart politics, it’s morally obscene and it’s bad economics too."

She added: "Surely the Government doesn’t think it can reintroduce austerity for the people who put their health, and in some cases their lives, on the line to help the rest of us.

"If you want to motivate a workforce when we are still facing a second wave of a pandemic, and we’re going to have a tough winter – we all know that – the last thing you do is threaten to cut their pay."

Ms O’Grady also refused to rule out the possibility of strike action by public-sector workers.

She said: "I’m really conscious of the feeling out there that governments only seem to recognise the true value of labour when it’s withdrawn, but of course there is time to sort this out.

"Nobody can rule anything out at the moment, but what I am saying and asking for is that the Government stands by key workers, respects the contribution they are continuing to make, recognises that this is absolutely the wrong time to be talking about pay cuts, and instead we need to start talking about fairness."