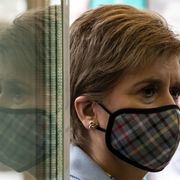 Nicola Sturgeon has said she would likely stand down from her position if Scotland was to vote against independence again.

Scotland’s first minister said she believes "when Scotland next votes on independence it will vote yes" but added she would probably "make way for someone else" if the result echoed that of the last referendum in 2014.

Asked during an appearance on ITV’s Loose Women what she would do if another Scottish independence referendum was held and the population voted to remain in the UK, Ms Sturgeon said: "’I suspect I would make way for someone else.

"But I’m not contemplating that at the moment."

The SNP is strongly committed to holding another independence referendum.

The party previously said such a referendum should be held once the COVID crisis has passed.

Last month, Boris Johnson ruled out another referendum on Scottish independence being held while Europe is dealing with Vladimir Putin’s invasion of Ukraine.

Speaking at the Scottish Conservative conference in Aberdeen in March, the PM said: "This is not the time for yet more delectable disputations about the constitution when our European continent is being ravished by the most vicious war since 1945 and when public service and the economy need to recover from the pandemic.

"When we face so many challenges but when we also have so much going for us and so much to look forward to, let’s put that endless confected division behind us and let’s take this country forward in a way that makes us all proud – delivering prosperity and opportunity at home and giving leadership that makes us a force for good around the world."

He added that "now is the time to go beyond the parochialism and constitutional myopia of the SNP" and called for a focus on "projects that will bring jobs and growth to the whole UK".

Earlier this week, Ms Sturgeon was spoken to by Police Scotland to "remind her of the importance of wearing a face covering when there is a legal requirement to do so".

It came after footage showed the first minister apparently not wearing a mask as she greeted customers on a visit to a barbers in East Kilbride, South Lanarkshire, on Saturday.

Until Monday, a legal requirement to wear face coverings in most indoor public places was in place in Scotland.

The Scottish first minister apologised for what she said was "a few seconds" without a face covering and said officers were "absolutely right" to contact her.

Asked whether she would step down for breaking COVID rules, as she has demanded Mr Johnson to do, Ms Sturgeon told Loose Women: "’I don’t think they are equivalent.

"I was in the street, I was called into a barbershop. Just for a few seconds I forgot to put my mask on – it was in my pocket."

She continued: "With Boris it’s the serial breaches at a time when the rest of the country was in very, very strict lockdown.

"It’s really important that people can trust the prime minister to tell the truth. There’s got to be consequences for your actions."

Ms Sturgeon added that it was right that she received a "harder time" than others out of the public eye who have breached COVID rules.