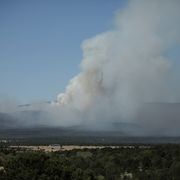 The largest wildfire burning in the United States is heading towards mountain resort towns in northern New Mexico as more people prepare to evacuate their homes.

The Hermits Peak and Calf Canyon blaze, which is being fanned by strong winds, has burned a 45-mile long path up the Sangre de Cristo mountains in just over a month.

Residents in the 1,000-year-old community of Taos and the Angel Fire ski resort have been packing their belongings into cars and trailers after they were warned to be ready to go.

The fire, which has already burned hundreds of homes elsewhere, has been picking up momentum, racing up slopes and along exposed ridgelines, as it throws ember into the air.

It has destroyed land and watersheds used by Indo-Hispano farmers and ranching villages that have relied on them for centuries for logging, firewood and irrigation.

It now threatens forests where the Picuris Pueblo and Taos Pueblo Native American tribes have hunted and gathered building materials for around 1,000 years.

Along with two more days of dry conditions, forecasters are predicting the strong winds to continue, which makes it difficult for aircraft to drop water on the fire.

"This is not easy. When we can’t fly aircraft, when we can’t get people on the direct edge of the fire, when it’s spotting over us, that’s a huge concern for us."

Fire crews are concerned about the potential of the fire spreading north, toward small villages in the Rincon Mountains and rural towns that include skiing communities.

Crews have also been trying to direct flames around homes on the northern and southern ends of the fire – bulldozing firebreaks, putting up sprinklers, clearing trees and raking pine needles.

More than 1,800 firefighters and support personnel are involved in the operation to tackle the blaze.

A federal disaster has already been declared because of the blaze, which is partly due to a preventative fire that escaped containment after it was set in early April to clear brush and small trees so they could not serve as wildfire fuel.

That fire merged with another wildfire several weeks later.