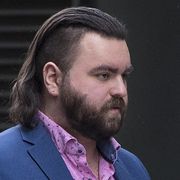 A neo-Nazi student who carved a swastika into his girlfriend’s buttocks using his nail has been convicted of terror and hate offences.

Andrew Dymock told jurors "thank you for killing me" after he was found guilty of 15 charges at London’s Old Bailey.

The 24-year-old, convicted of crimes that took place in 2017 and 2018, promoted the extreme right-wing System Resistance Network (SRN) group, which aimed to "stir up a race war", through a Twitter account and website, the court heard.

He used online platforms to raise money for the now-banned organisation, which "preached zero-tolerance" to non-whites, Jewish and Muslim communities and described homosexuality as a "disease".

Dymock denied being behind the accounts and claimed he was "set up" by others, adding material linking him to content on the sites was "planted in his possession without his knowledge".

Police found a picture on one of his devices showing a swastika cut into his girlfriend’s behind and he told detectives in an interview in January 2019 he used his nail to scratch the symbol.

Dymock, who was at the time studying politics at Aberystwyth University in Wales, claimed he was set up by his now former partner, who had failed to recruit him to join banned terrorist group National Action (NA).

He told a jury the malicious activity included "people in the police or other agencies" who were sympathetic to NA and seeking to protect his ex-girlfriend.

But he was found guilty of 12 terror-related offences, including five charges of encouraging terrorism and two of fundraising for terrorism.

He was also convicted of four counts of disseminating terrorist publications, and possessing a terrorist document.

Dymock was also found guilty of stirring up racial hatred and hatred based on sexual orientation, and possessing racially inflammatory material.

Prosecutor Jocelyn Ledward earlier said he was not being prosecuted for holding racist, anti-Semitic or homophobic beliefs, or for his "adherence to a neo-Nazi creed".

She told jurors: "Rather, he is facing prosecution for his encouragement of terrorist activity, of violence, as a means to shape society in accordance with his beliefs, rather than through free speech and democracy."

SRN was one of a small number of groups which filled a "dubious gap" left following the proscription of far-right group National Action and was itself banned in 2020, Ms Ledward said.

A tearful Dymock asked to say goodbye to his parents, Stella and Dr David Dymock, before he was taken down to the cells, telling jurors: "Thank you for killing me." Meanwhile, his mother said: "National Action has done this."

The defendant was remanded in custody by Judge Mark Dennis QC until sentencing which is due to take place on 24 June.