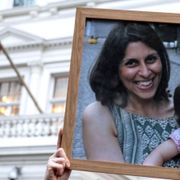 The UK will pay £400m to Tehran to free Iranian-British woman Nazanin Zaghari-Ratcliffe, according to reports on Iranian state TV.

Quoting an anonymous official, a state broadcaster said deals had been reached with both Britain and the US in order to release prisoners with Western links held in Iran.

It was said the UK had agreed to pay the £400m debt over the non-delivery of tanks dating back to the 1970s.

The US was said to have agreed a prisoner swap in exchange for the release of $7bn (£5bn) of frozen Iranian funds, but Washington did not immediately acknowledge any deal.

"The release of Nazanin Zaghari-Ratcliffe in exchange for the UK’s payment of its £400m debt to Iran has also been finalised," the official said.

It comes just days after Mrs Zaghari-Ratcliffe was sentenced to another year in prison on charges of "propaganda activities against the regime" in Iran.

She was also banned from leaving the country for one year for participating in a protest in front of the Iranian embassy in London in 2009.

That came after she completed a five-year sentence in the Islamic Republic after being convicted of plotting the overthrow of Iran’s government, a charge that she, her supporters and rights groups deny.

While employed at the Thomson Reuters Foundation, the charitable arm of the news agency, she was taken into custody at Tehran airport in April 2016 as she was returning home to Britain after visiting family.

Richard Ratcliffe told the PA news agency he and his family "have heard nothing" about a deal to secure his wife’s release.

He said: "It’s probably a good sign that it’s being signalled, just as last week’s sentence was a bad sign.

"But it feels part of the negotiations rather than the end of them."

A Foreign Office spokesman said: "We continue to explore options to resolve this 40-year-old case and will not comment further as legal discussions are ongoing."

Labour MP Tulip Siddiq, who represents Mrs Zaghari-Ratcliffe’s constituency of Hampstead and Kilburn, told Sky News: "We weren’t aware at all of any kind of deal that was meant to be taking place.

"I was caught off guard when I read the story for the first time online as was Nazanin’s family.

"What I do know is that the ambassador in Tehran went to visit Nazanin this morning at her house, but they didn’t mention anything about the deal.

"The discussions were about COVID and whether Nazanin would receive the vaccine. There was no mention of any negotiations and nothing about paying the debt.

"However, what I would say is that Nazanin’s family are not letting their hopes get too high."

Meanwhile, US State Department spokesman Ned Price said: "Reports that a prisoner swap deal has been reached are not true.

"As we have said, we always raise the cases of Americans detained or missing in Iran. We will not stop until we are able to reunite them with their families."

Sky’s diplomatic editor Dominic Waghorn said: "The impression I get from the Foreign Office is that this is not true.

"Regrettably there is no confirmation from the Americans or the British.

"We weren’t aware of any deal

"This really came as a surprise to me and Nazanin’s family."

Earlier, Foreign Secretary Dominic Raab said the debt "is not actually the thing that is holding us up at the moment".

Britain refused to deliver the tanks to the new Islamic Republic when the shah was toppled in 1979, but kept the cash despite British courts accepting it should be repaid.