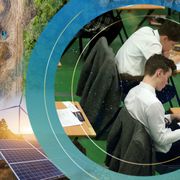 The new natural history GCSE is "critical" to equipping young people with the skills to tackle the climate and nature crises, its supporters have said as details were unveiled.

From September 2025 young people taking the new Natural History qualification will study organisms, climate change and other environmental and sustainability challenges, the government confirmed on Thursday.

Nurturing the next generation of ecologists is "critical if we are to turn the tide on the risk of extinctions across our natural world," said Conservative MP Philip Dunne, who chaired a cross-party review of Britain’s biodiversity and also called for a dedicated GCSE.

The UK is one of the most nature depleted countries in the world and the worst of the G7 group of countries, with just half (53%) of its biodiversity remaining.

Students will also learn skills to help them forge a career in the natural world, such as through conservation and fieldwork.

The new qualification, designed by exam board OCR, will be taught to pupils aged 14-16.

Under the education department’s broader plans, schools are to become greener, with ultra-low carbon buildings and increased biodiversity in their grounds.

Education Secretary Nadhim Zahawi called education "one of our key weapons in the fight against climate change".

Students can already learn about the environment through studying urbanisation in geography and habitats in science, but the government said the new course would "go further" in teaching them about the history and evolution of species and the impact of life on natural environments.

Professor Justin Dillon, from Exeter University, warned the course might "struggle to gain a foothold in an already crowded curriculum," competing with well-established GCSEs in biology, chemistry and geography.

He said all subjects on the school curriculum should address environmental and sustainability issues.

The government said it will bolster environmental education in some existing subjects.

Details and sample papers are yet to be announced, but Mr Dunne, whose review recommended a dedicated GCSE to boost awareness and appreciation of nature, said he would like it to cover "the complexity, connectedness and fragility of different ecosystems" as well as "nature’s contribution to people, such as improving water quality" and conservation techniques.

Ms Colwell, who led calls for the subject to be taught in schools, told the Press Association that people must better understand and monitor the impact of the climate crises on nature in order to tackle it.

"Nature is a great informer about what is happening to the planet," and connecting with it can also improve mental health, she added.