NASA mission or no, thousands of people could still be killed by a completely unpredictable asteroid impact 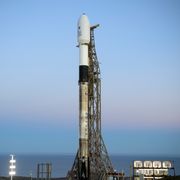 Before we get too excited about NASA’s asteroid deflection test, we should recognise that humanity is very bad at predicting impacts.

Since 1988 our planet has been hit by more than 1,200 asteroids larger than a metre in size. These weren’t big enough to completely destroy the planet or cause an extinction event (scientists are certain there won’t be anything like that for 100 years) but, they are certainly big enough to cause some damage.

But of those impacts, humanity only predicted five in advance – maybe six if we want to be generous and count the object known as A106fg, which may simply have been a close approach – but this accounts for less than 0.42% of all strikes on the planet. We cannot deflect asteroids we don’t know are there.

Even those five asteroids that were detected ahead of impacting Earth were discovered with just hours to spare. As they currently stand, our detection systems have never offered more than a day’s warning in advance – though scientists hope and expect them to improve.

That timeline between discovery and impact offers significantly less wriggle-room than the five years between the DART mission getting approval at NASA and its scheduled rendezvous with Dimorphos next year.

With so little notice we would not only be unable to deflect an asteroid off-course, we wouldn’t even be able to evacuate people expected to be affected by the impact.

Our ability to detect asteroids before they impact the planet is still in its infancy, in part because of limits set by the laws of physics.

Surveying asteroids in the dark of space in our solar system depends on them reflecting light towards us, and that depends on the direction of their approach relative to the sun and the phase of the moon.

If they come at us from an angle where we can’t see their approach, then they will strike without warning and have the potential to cause enormous damage.

Asteroid impacts are so powerful that when they occur over the ocean or remote parts of the planet, they are usually detected by equipment used to monitor for secret nuclear testing.

But sometimes, when they occur in inhabited areas, they are detected by the people actually affected by the impact.

Back in 2013, a meteor exploded in the atmosphere near Chelyabinsk in Russia, causing an enormous fireball, shattering windows, and leading to potentially more than a thousand people to seek medical treatment for their indirect injuries.

That asteroid is believed to have been roughly 20 metres in size and was completely undetected before it entered the atmosphere.

It burned up in the skies over the Ural region and exploded with 30 times as much energy as the Hiroshima nuclear bomb at an altitude of 30km, briefly outshining the sun.

According to Johns Hopkins Applied Physics Laboratory, the Chelyabinsk meteor created "an airburst and shockwave that struck six cities across the country - and [sent] a stark reminder that dangerous objects can enter Earth’s atmosphere at any time".

"Astronomers estimate there are tens of thousands of near-Earth asteroids close to 500ft (150m) wide and larger, big enough to cause regional devastation if they actually hit Earth.

"The Chelyabinsk object was just about 60ft (18m) wide, demonstrating that even small asteroids can be of concern - and making real-world tests of space-based planetary defence systems all the more important," the university added.

While the incident demonstrated that small asteroids can be of concern, there is a long way to go before missions like DART suggest our planetary defences are capable of protecting them.

A similar explosion in cities such as New York or London could kill thousands of people, especially if it compromised the structural integrity of a large building. At the moment, we simply wouldn’t see it coming.