‘My pain was ignored’: Mother of baby who died at maternity unit said request for caesarean was refused 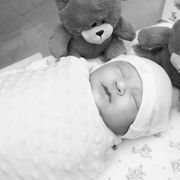 The mother of a baby who died at a maternity unit under investigation for failings has told her son’s inquest that she felt neglected and her request for a caesarean section was ignored.

The inquest into his death has heard that his mother Emmie Studencki went to hospital four times with bleeding in the late stages of her pregnancy.

On the fourth occasion the bleeding was so severe she was taken by ambulance.

In a statement read to the inquest she described how once in hospital she experienced the "worst pain I’ve ever felt".

She said several medics were called and an emergency caesarean section was discussed but then a decision was taken to continue monitoring.

She described how later that day a doctor examined her, but she was not told about the suspected diagnosis of placental abruption. At that stage she lost more blood and was rushed for an emergency caesarean section.

Quinn was born soon after 7pm.

After surgery, she was told by a midwife that her "placenta was in bits" and she had required two blood transfusions.

Quinn was taken to intensive care. She was told by a neonatal doctor that he had been breathing on his own when he was born. She had to inform the doctor that she had a Group B strep infection, an infection that can cause serious illness in newborns. She recalled hearing the doctor ask the midwife why they had not told him.

Quinn’s health deteriorated quickly. He died in his parents’ arms 36 hours after he was born.

His mother says they have serious concerns about their care, including the advice when she had attended hospital with bleeding.

"I was never informed about placental abruption," she said in her statement.

She also highlighted the decision not to perform a caesarean section at 3pm, some four hours before Quinn was eventually born. "We do wonder what impact this had," she said.

The inquest at Nottingham Coroner’s Court is due to hear evidence for three days.

A review into maternity services at the Nottingham University Hospitals Trust is currently under way. So far more than 460 families have contacted the review.

Earlier this month the families wrote to the health secretary expressing their concern about the pace and independence of the review which was commissioned by the local clinical commissioning group, NHS England and NHS Improvement.

They asked for Donna Ockenden, the independent midwife who investigated maternity failings at Shrewsbury and Telford Hospitals Trust, to be put in charge of the review.

However, last week the health secretary announced it would now be led by Julie Dent, who has previously worked as a Chair and Chief Executive within the NHS.

On Monday, the families involved said they felt "severely let down, confused and further traumatised" adding that they were not consulted prior to any decisions being made.

They added: "Since we went public with our grave concerns over the current review – nearly three weeks ago – not one person from NUH, the CCG nor NHSEI has been in contact with us.

"We welcome the offer by the secretary of state to meet with him and look forward to discussing issues around poor maternity care in Nottinghamshire and the need for a truly independent review that can produce the real and impactful intervention that is required if families are to be safeguarded.

"We would urge Julie Dent to strongly consider her appointment. Families request she declines the offer of chair."

A spokesperson for Nottingham University Hospitals said: "We will continue to engage fully with the independent review and remain committed to improving local maternity services using feedback from the review as well as local families and NHS partners."

A spokesperson for the NHS said: "No one should have to go through what these families in Nottingham have suffered and it is absolutely right that they have their experiences of poor care responded to and learned from. The next steps of the review including engagement with families will be set out shortly."