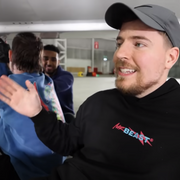 Mr Beast has surpassed PewDiePie as the most subscribed YouTuber.

PewDiePie, real name Felix Kjellberg, held the title for almost a decade, becoming the most subscribed star on the platform in 2013.

The Swede specialised in gaming reaction videos which made him the first YouTuber to surpass 100 million subscribers in 2019.

But Mr Beast has finally knocked him off the throne, gaining his 112 millionth subscriber this month, putting him above PewDiePie’s 111 million. Exact figures do not appear on the streaming site.

Rather than videogames, Mr Beast’s videos focus on philanthropy, seeing him give away huge amounts of cash, prizes and do charity work.

His videos have seen him give away a private jet, recreate the Netflix show Squid Game for a cash prize, and offer people $100,000 to quit their jobs.

He also attempts challenges, such as getting buried alive, getting hunted by the FBI, and building the world’s largest Lego tower.

One video in September showed his popularity extended beyond the internet world to real life when thousands packed out a shopping mall in New Jersey to watch him open a burger restaurant.

Speaking previously PewDiePie has said that Mr Beast would "definitely" knock him off the top spot eventually.

He said in a video from August: "I can’t wait for it to be over. He definitely deserves it. I hope he does it."

Outside the world of YouTube, Donaldson has other ventures including his MrBeast Burger virtual restaurant, another food company named Feastables, and has money in a number of investment funds and fin-tech companies.

However, Mr Beast’s channel still isn’t the most subscribed channel overall on the platform, with that accolade belonging to Indian music video company T-Series, which has more than 229 million subscribers.