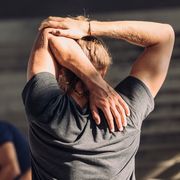 Frequent strenuous exercise increases the risk of developing motor neurone disease (MND) in some people genetically predisposed to develop the condition, according to new research.

Researchers at the University of Sheffield say the study is a step forward to understanding the link between high levels of physical activity and the development of the neurodegenerative disease.

However, the team has stressed most people undertaking vigorous exercise do not develop MND and sport continues to have many health benefits.

Speaking to Sky News, one of the authors, Dr Johnathan Cooper-Knock, said: "I wouldn’t advise anybody to change their exercise habits because we don’t know who is at risk at the moment.

"This work shows frequent, strenuous exercise is causal for motor neurone disease… at the moment we don’t know who is at risk but this lays the platform for looking at that."

MND, or amyotrophic lateral sclerosis (ALS), affects the motor neurones in the brain and spinal cord that connect the nervous system and muscles to enable the body to move.

The messages from these nerves gradually stop reaching the muscles, leading them to weaken, stiffen and eventually waste.

Dr Cooper-Knock, who is a senior lecturer in neurology at the university’s Neuroscience Institute, said diseases such as MND are caused by "environmental and genetic factors".

He hopes the next step will be carrying out research to identify which individuals are genetically vulnerable to the disease and how their levels of exercise increase the risk of developing it.

He added: "About 10% of MND is inherited and 90% doesn’t run in families but has a significant genetic component.

"Hopefully we can do some good, we are trying to help people and prevent suffering."

The Sheffield team says the aim is to help doctors to be able to offer advice to families and patients about the risks so they can make personal decisions about their exercise habits.

Dr Brian Dickie, director of research development at the Motor Neurone Disease Association, said: "In recent years, understanding of the genetics of MND has advanced, but there has been little progress in identifying the environmental and lifestyle factors that increase the risk of developing the disease.

"This is, in part, because the genetic and the environmental studies tend to be carried out in isolation by different research teams, so each is only working with part of the jigsaw.

"The power of this research from the University of Sheffield comes from bringing these pieces of the puzzle together."

The study’s findings have been published in the journal EBioMedicine.