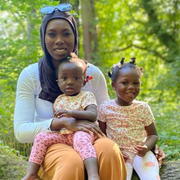 Two children killed in a Nottinghamshire flat fire have been named by police as they said their mother has also died.

Naeemah Drammeh, aged one, and three-year-old sister Fatimah, were taken to Queen’s Medical Centre along with their mother after the blaze in Fairisle Close, Clifton, in the early hours of Sunday.

The sisters were pronounced dead at the hospital.

Nottinghamshire Police said their mother Fatoumatta Hydara, aged 28, had been placed on a life support machine, but died on Tuesday morning.

Sky’s Midlands correspondent Becky Johnson, speaking from the scene of the fire, said the children’s father had been away in America at the time of the blaze.

"He was actually here yesterday," she said. "He had boarded a plane as soon as he could to get back, having heard this dreadful news.

"He was shell-shocked when he was here and was on his way to the hospital to be at his wife’s bedside – so desperately sad for him now, not only having to cope with the loss of his two young children, but also the loss of his wife."

A triple murder inquiry is under way after a joint fire and police investigation.

A 31-year-old man from Clifton was arrested on Sunday night on suspicion of murder.

Detectives have been given more time to question him, and he remains in custody.

Detective Chief Inspector Mark Sinski, who is leading the investigation, said: "We are dealing with one of the most horrendous crimes – the death of two young children and their mother.

"This is a deeply upsetting tragedy and I can only imagine the family’s pain. They include the woman’s husband and the father of the two children, who was not in the UK at the time of the fire."

He added: "A large team of detectives has been working long days and nights to investigate the circumstances surrounding this tragic incident."

Neighbouring properties were temporarily evacuated during the incident.

Colin Brown, a neighbour, told Sky News: "They were a nice family. She did keep herself to herself, but she would always say hello, and the kids always said hello… I don’t know who would want to do this to them."

Police said increased patrols would continue in the area over the coming days.

DCI Sinski thanked those who have already come forward, and appealed for anyone else with information – "regardless of how insignificant you think it may be" – to contact the force.

"We would specifically like to speak to anyone who was in or around Fairisle Close between 12am and 4.30am on Sunday morning," he said.

Witnesses or anyone with information can call 101 and ask for Nottinghamshire Police quoting incident 110 of 20 November 2022, or contact Crimestoppers anonymously on 0800 555 111.