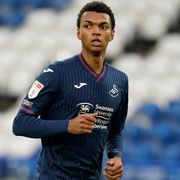 The 20-year-old striker was subjected to "vile racist abuse", the club says, after scoring against his former team on Saturday.

That was despite a three-day social media boycott which received the support of leading sports bodies and athletes – including British Formula One driver Lewis Hamilton and the Football Association – in a show of solidarity to tackle racism, abuse and discrimination.

"The fact that this has happened across a period where clubs, players and stakeholders have come together for a boycott of social media for this very reason, again shows just how much work still needs to be done," read a statement from the Sky Bet Championship football club.

He is the fourth Swansea player to be racially abused on social media since February, following Yan Dhanda, Ben Cabango and Jamal Lowe – "a damning indictment on the world we live in", according to the Welsh club.

"Chief executive Julian Winter recently wrote to both Twitter and Facebook, the latter replying with examples of how they try to combat online abuse. But with vile incidents appearing on a daily basis, stronger action is clearly required," it said.

"Morgan has the full and unwavering support of everyone at Swansea City, and our message remains clear. Enough is enough."

An FA statement, tweeted by England captain Harry Kane, said the boycott of social media was to "demonstrate our collective anger. But this won’t eradicate abuse on its own".

It added: "We will continue to challenge social media companies to make changes to their platforms, urge government to introduce strong legislation quickly and request that individuals call out and report online abuse when they see it."

The Premier League and EFL, plus all member clubs including Tottenham Hotspur, also called for action and urged Facebook, Instagram and Twitter "to use their power to affect change and ensure there are real-life sanctions for online hate".