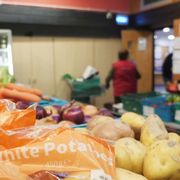 A minister has said she does not agree with a Conservative MP who has been heavily criticised for claiming that people who use food banks do not know how to cook or manage their finances properly.

Lee Anderson, who made the remarks during a House of Commons debate on Wednesday, was accused of insulting people who are struggling to feed their families and Labour said it was "beyond belief".

Mr Anderson said people at a food bank in his Nottinghamshire constituency of Ashfield were being shown how they could cook "cheap and nutritious meals" from scratch on a budget of about 30p a day.

Speaking to Sky News on Thursday morning, Justice Minister Victoria Atkins said she is "not sure that was actually what Lee was saying".

"In fairness, I have said I don’t agree with him," she told Kay Burley, stopping short of calling on Mr Anderson to apologise for his remarks.

"This is not the view of me or of anyone else in government. We want to give not just immediate help but longer-term support as well – and I really, really appreciate the efforts of food banks and voluntary groups around the country who work day in, day out to help people when they are in great distress."

She continued: "I think he was talking about his own local food bank and how the food bank was trying to offer not just immediate help with the provision of food, but also long term help, for example, help with budgeting and so on."

Responding to a suggestion that the comments accused people of using food banks to get a "ready meal" because "they can’t be bothered cooking", Ms Atkins added: "Yeah, that’s not right and that’s absolutely not right.

"I’ve spent my ministerial career working with very vulnerable people. Cooking lessons will not be the complete solution to that."

During Mr Anderson’s contribution in the Commons, made during the second day of debate on the Queen’s Speech, Labour MP, Alex Cunningham, intervened to ask whether it should be necessary to have food banks in 21st century Britain.

Mr Anderson said: "I think you will see first hand that there’s not this massive use for food banks in this country but generation after generation who cannot cook properly, they can’t cook a meal from scratch.

The comments instantly attracted a deluge of opprobrium inside and outside the chamber.

SNP MP Joanna Cherry, who followed Mr Anderson in the debate, said people do not use food banks because they do not know how to cook, but because "we have poverty in this country at a scale that should shame his government".

Labour’s shadow work and pensions minister Karen Buck said: "The idea that the problem is cooking skills and not 12 years of government decisions that are pushing people into extreme poverty is beyond belief.

"Out of touch doesn’t even cover it."

Liberal Democrat work and pensions spokeswoman, Wendy Chamberlain, said in a statement: "These comments are disgraceful and an insult to millions of hard-working people who are struggling to put food on the table for their family through no fault of their own.

"Lee Anderson should apologise straight away for his shameful remarks."

The Child Poverty Action Group claimed politicians "would do better to back real-world solutions, like bringing benefits in line with inflation this autumn".

The Trussell Trust charity said that "cooking meals from scratch won’t help families keep the lights on or put food on the table, if they don’t have enough money in their pockets".

TUC general secretary, Frances O’Grady, said that "rather than being condescending, Conservative politicians should be putting pressure on the chancellor to call an emergency budget".

Mr Anderson took to social media on Wednesday evening to describe how is remarks had been misinterpreted.

"I did not say poor people cannot cook or there is no need for food banks. I said there is not the need currently being parroted out by the MSM," he said.

"Today, I challenged the whole Parliamentary Labour Party to come to Ashfield to visit the food bank I work with. They give food parcels away on the condition they enrol for cooking and budgeting lessons.

"I have done several events at the foodbank where we batch cooked food on a budget. My offer stands. Come to Ashfield."

Mr Anderson has previously run into controversy after saying he would not support England at the Euros football tournament because players chose to "take the knee" to protest over racial injustice.

His comments on food poverty come after George Eustice, the environment secretary, told Sky News consumers are under pressure due to rising prices should buy value brands.