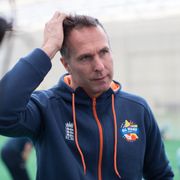 Former England captain Michael Vaughan will not play a role in the BBC coverage of this year’s Ashes cricket tour following allegations made by former Yorkshire player Azeem Rafiq.

The broadcaster said it had taken the decision to avoid a potential "conflict of interest" amid the claims which have been backed by another player, Adil Rashid.

The statement said: "While he is involved in a significant story in cricket, for editorial reasons we do not believe that it would be appropriate for Michael Vaughan to have a role in our Ashes team or wider coverage of the sport at the moment.

"We require our contributors to talk about relevant topics and his involvement in the Yorkshire story represents a conflict of interest."

Rafiq has called for the entire leadership team at Yorkshire County Cricket Club to resign after he revealed the scale of racism he had suffered while playing for the team to a committee of MPs at Westminster.

He has accused Vaughan of saying "there’s too many of you lot" – in reference to four players of Asian descent in the Yorkshire team – at a 2009 game.

Responding to the BBC’s decision, Vaughan said he is "very disappointed not to be commentating for TMS on the Ashes and will miss working with great colleagues and friends".

He added that he is "looking forward to being behind the mic for @foxcricket in Australia".

"The issues facing cricket are bigger than any individual case and I want to be part of the solution, listening, educating myself and helping to make it a more welcoming sport for all," Vaughan said on Instagram.

Vaughan has "categorically" denied making the remark and claimed his reputation is being "trashed unfairly".

During a 30-year career as both a cricketer and a commentator, he said he had "never been accused of anything remotely similar", adding that to be confronted with such an allegation "11 years after it has supposed to have happened" is the "worst thing I have ever experienced".

The 47-year-old said anyone who had seen TV footage of a Yorkshire County Cricket Club pre-match huddle in 2009 "and the interaction between the players would find it hard to reconcile those scenes with the version of events that has been presented".

Vaughan was stood down from his BBC 5 Live show earlier this month after he was accused of making the racist remark.

Mr Rashid, who still plays for Yorkshire, told The Cricketer: "I wanted to concentrate as much as possible on my cricket and to avoid distractions to the detriment of the team but I can confirm Azeem Rafiq’s recollection of Michael Vaughan’s comments to a group of us Asian players."

A fourth player in the group, Ajmal Shahzad, previously told the Daily Mail he had no recollection of the event. He said "the senior guys were really good to me".

Rafiq, who played two spells at Headingley between 2008 and 2018, initially voiced his claims in an interview with Sky News in September 2020, alleging "deep rooted" racism at the club.

Yorkshire County Cricket Club launched a formal investigation and concluded he was the victim of "racial harassment and bullying" but nobody at the club faced disciplinary action.

Its response has attracted widespread criticism and has resulted in senior resignations, with several major sponsors also cutting ties.

The first Test of the forthcoming Ashes series will see England take on Australia at The Gabba from 8 December.

Vaughan remains part of the Fox Sports team and also has a column in the Daily Telegraph.