Matt Hancock on I’m A Celebrity: Could the former health secretary actually win? The contestants – and public – seem to be thawing 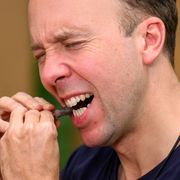 If a week is a long time in politics, a few days in the I’m A Celebrity jungle is almost a lifetime.

Former health secretary Matt Hancock joined the camp in Australia less than seven days ago as the most controversial and disliked contestant in the show’s 22-season history, but after gamely eating a camel’s penis, a sheep’s vagina and a fish eye – and facing up to a coffin full of snakes – he’s now placed as third favourite to win by several bookies.

Before the MP – still serving the constituents of West Suffolk – joined the I’m A Celebrity camp as a late arrival, his decision to appear on reality TV after breaking the government’s own lockdown rules was heavily condemned by campaigners and members of the public who lost loved ones during the pandemic, and he was effectively booted out of the Conservatives to serve as an independent until he is reinstated.

The welcome from some of his campmates was also unsurprisingly frosty.

Singer Boy George explained he would feel guilty "sitting here like I’m having fun with him" as he wasn’t allowed to see his mother in hospital during the pandemic, even when he "thought she was going to die"; radio presenter Chris Moyles questioned why Mr Hancock wasn’t at work; and comedian Babatunde Aleshe said it was "hard" to push views aside "because of the many people whose lives have been affected".

In what came as no surprise to anyone, Mr Hancock, 44, was voted by the public to carry out every single disgusting, terrifying bushtucker trial from the moment he entered the camp.

From the stomach-churning eating task to the "tentacles of terror" and "house of horrors", he has faced all the nasties Ant and Dec have thrown at him with a robotic, non-fussy functionality that has seen him win plenty of stars to keep his campmates fed.

After years of knowing how to avoid political questions he didn’t like – a tactic he fully admitted to his campmates and described as the "pivot" – it seems he has deployed the same keep-calm-and-ignore-your-way-through-it-until-it’s-over mentality in the jungle.

And then, in Monday night’s episode, for the first time since he entered the camp, viewers have let him off the next one. Despite three campmates being needed for the "angel of agony", Mr Hancock will not be one of them; it seems the public’s desire to see terrified campmates screaming their way through critter-filled tunnels and winning no stars is starting to trump any contempt for, or thirst to humiliate, a politician who broke the rules.

Bookies including William Hill and Betfair have slashed the odds on the MP winning the show, with Betfair saying he is now 6/1 third favourite after Lioness Jill Scott and rugby star Mike Tindall, and William Hill giving him 5/1 odds and the same top-three running order.

Most of his campmates are also thawing. Despite a simmering tension with Boy George, there have been no full-on rows… yet. In Monday night’s episode, Moyles said he had managed to separate Matt Hancock the politician from Matt, his jungle campmate.

"This is how I look at it," Moyles said. "There is Matt Hancock… And in camp there is our campmate, Matt, who is, God love him, doing every single trial, every day, and bringing back stars so we can eat." Then, giving a slight grimace to show reluctance, but almost affectionately, he added: "I may have voiced my opinion about Matt Hancock before, but in here, the star-winning Matt, he’s doing all right."

I’m A Celeb voting entails viewers getting in touch to keep in their favourite (or most entertaining or controversial) campmate, rather than voting out their least favourite, which usually means the quieter contestants who have had less screen time leave first – so it stands to reason that Mr Hancock will probably remain on the show for a decent period, if not until the final episode.

Read more:
‘Sorry doesn’t really cut it’: Campmates grill Hancock
‘Quite a lot’ of MPs have downloaded I’m A Celeb app to vote for Hancock trials
Politicians who have traded Westminster for reality TV

As health secretary, Mr Hancock was up there helping to make a lot of the government’s decisions during the pandemic and he broke coronavirus social distancing rules by having an affair in his ministerial office with an aide, Gina Coladangelo – caught on camera "grabbing booty, bruv", as Aleshe put it.

Questioned by his campmates, he has apologised and admitted he made mistakes, told them he is hoping for the public to see the "real" him and is searching for "forgiveness".

Ms Coladangelo, who is now his girlfriend, could well be waiting for him at the end of the rickety wooden bridge all I’m A Celeb stars traverse when they leave the show, the photographers waiting with even more purpose than usual to get the shot of their kiss.

But could that photograph really be of Matt Hancock, King of the Jungle? Or will it be Matt Hancock, the former health secretary who broke the rules and really should have resisted the pull of I’m A Celebrity… Get Me Out Of Here!?

The show is expected to come to an end around 27 November, three weeks since the first campmates entered the jungle – a very long time in politics, and an even longer time in reality TV.