Matt Hancock blames Public Health England for care home COVID failings in 2020, but that’s not what he told me 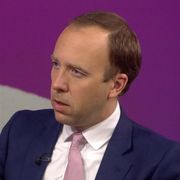 The government has long been defensive over its handling of the risk posed to residents of care homes during the pandemic, but there is no doubt the High Court ruling tests that defensiveness.

Despite the claims made by then health secretary Matt Hancock that ministers had put a "protective ring of steel" around care homes, the court found the government broke the law by failing to protect thousands of elderly and disabled residents in March and April of 2020.

The response from both Boris Johnson and Matt Hancock has been to shift the blame very clearly to the now-disbanded Public Health England.

During PMQs, Mr Johnson said: "The thing that we didn’t know in particular was that COVID could be transmitted asymptomatically in the way that it was. That is something I wish we had known more about at the time."

In a statement, a spokesman for Mr Hancock said: "This court case comprehensively clears ministers of any wrongdoing and finds Mr Hancock acted reasonably on all counts.

"The court also found that Public Health England failed to tell ministers what they knew about asymptomatic transmission."

But that is not the explanation Mr Hancock gave me last week when we had a long, and quite difficult, exchange on the subject during an interview.

I asked him whether he regretted the way it was handled and whether it had been a mistake.

His response was emphatic – the policy was not wrong, he said, and it was not a mistake to discharge people from hospitals into care homes.

His argument was that the testing regime was simply not in place, and therefore people could not be held in hospital indefinitely.

He claimed the narrative in the media around the care home issue had been wrong.

But that is not what the High Court found today.

It has said policies in the spring of 2020 were unlawful because they failed to take into account the risk to vulnerable people of non-symptomatic transmission.

As we have heard so often during the pandemic – ministers are ultimately responsible, no matter how technical or complicated the policy area.

Read more:
Daughter of care home victim says claims of ‘protective ring’ were ‘a lie’
Hancock says ‘we worked as hard as we could to protect care homes’

Advisers advise, as the phrase goes, but ministers decide.

Matt Hancock’s argument today is that his advisers did not advise.

But that’s different from saying it was not a mistake to release people from hospital without testing, which is what he told me last week.