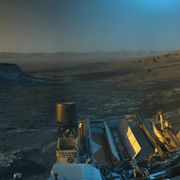 NASA has released a "rare postcard" from Mars after being inspired by a "remarkable" image that its rover sent back from the red planet.

The US space agency was able to combine two black and white images of the landscape taken at different times of the day and then added colours.

The pictures were from Curiosity while it was high up on Mount Sharp, a three-mile-tall (5km) mountain which the robotic vehicle has been driving up since 2014.

The artistic interpretation of Curiosity’s view features rolling hills in the distance, while a field of sand ripples known as the "Sands of Forvie" stretches a quarter to a half-mile away.

The rover typically takes 360-degree photos of its surroundings as part of its duties whilst roaming Mars.

Low quality images from the black and white navigation cameras are then compressed and sent to Earth, but the latest image was too unique to only be viewed in low resolution.

Members of the mission team were stunned by the image and worked to capture the scenery in the highest quality possible.

The team was able to add colours to it, introducing blues, oranges and greens to the landscape.

This is not what the human eye would see, but the image is a representation of the scenery at different period of the day.

These images were able to show the scenery under different lighting conditions with each photo highlighting various details in the landscape.

The two images were then combined creating a singular picture that featured blue elements from the morning and oranges from the photo later in the day.

Rafael Navarro Mountain, named after a Curiosity team scientist who died earlier this year, can be seen on the far right and the centre of the image features the view back down Mount Sharp.

NASA’s Jet Propulsion Laboratory has been leading the Curiosity mission and is managed by Caltech in Pasadena, California.