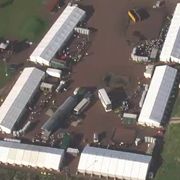 There are now no people at the Manston migrant processing centre after it experienced severe overcrowding earlier this month, Sky News understands.

The Home Office site in Kent, where thousands of migrants who have arrived in small boats have been taken since it opened in February, currently has zero people in it.

In recent weeks Manston, a former military base, has been at the centre of controversy as it is designed to hold up to 1,600 people for no more than 24 hours.

But earlier this month there were about 4,000 people in the centre, some who had been there for much longer than they should have been.

Migrants said they were sleeping on cardboard while unrest among migrants was spreading due to the conditions.

Concerns over infectious diseases were raised, with reports of diphtheria, and earlier this month health authorities said they were vaccinating migrants at Manston against the disease.

On Tuesday, Prime Minister Rishi Sunak’s spokesman said Manston is meant to be a temporary holding facility where people are moved on "often fairly quickly".

He said numbers spiked when another centre was set on fire so migrants from there had to be moved to Manston.

"You would expect numbers to be relatively low on a daily basis," he added.

Migrants who get sent to Manston are moved into the Home Office’s asylum accommodation system, which recently has often meant a hotel due to a shortage of available accommodation.

Due to the recent bad weather there have been fewer migrant crossings than earlier in the year.

Three days ago, a man staying at Manston became unwell and died after arriving in the UK by small boat the weekend before.

There is "no evidence at this stage" to suggest the death was "caused by an infectious disease", the Home Office said.

The Home Office said there will be no detailed comment until a post-mortem examination has been carried out.

Since the beginning of November, there have only been three days when migrants have arrived in Kent via the Channel.

From 12-14 November, 2,225 migrants arrived but there were zero arrivals on all other days up to 20 November, the latest Home Office figures show.