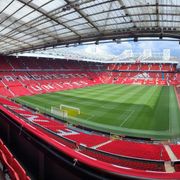 Manchester United Football Club could finally be sold by its American owners after a 17-year reign dominated by fan protests and declining on-pitch performance.

Sky News can exclusively reveal that the Glazer family is preparing to formally announce its intention to examine potential sources of outside investment that could include a full-blown auction of arguably the world’s most famous football club.

Sources said on Tuesday that investment bankers were being instructed by Manchester United‘s owners to advise on the process, which is likely to include a full or partial sale, or strategic partnership with third parties.

A statement confirming their intentions could come imminently, one of them said.

The announcement of a review of financial options that could include a sale process would signal an end to years of speculation over whether the Glazers might be persuaded to offload a club which for the past decade has experienced an almost-unmitigated footballing decline.

Read more:
How ‘scavenger’ Glazers bought club – and left Old Trafford ‘rusting’ and in a ‘mess’
Manchester United owners warned they have ‘run out of road’ and should sell up
Cristiano Ronaldo leaves Manchester United with immediate effect

The Old Trafford side has not won the Premier League title since 2013, and has sacked a succession of managers in the aftermath of the retirement of Sir Alex Ferguson.

More recently, the club has become embroiled in a bitter legal fight with Cristiano Ronaldo, its best-known player, over an interview in which he questioned United’s ambition and lambasted the Glazers’ approach to owning it.

On Tuesday, United announced that Mr Ronaldo had left "with immediate effect".

It remains possible that the family, which took control of United in 2005 in a £790m deal largely funded by debt, opt not to sell.

A partial sale to new investors, with capital being raised to fund an overdue redevelopment of Old Trafford, is one potential outcome from the process.

The Glazers have acknowledged the need for new infrastructure investment to transform the stadium into a genuinely world-class venue, while substantial funds are also required to enable the men’s team to compete once more at the top of the European game.

If United was sold outright, it would be the latest top-flight club to change hands, after Roman Abramovich agreed a £2.5bn sale of Chelsea to a consortium led by the American businessman Todd Boehly earlier this year.

United’s valuation in a sale would inevitably exceed the roughly $2.15bn market capitalisation implied by its share price during Tuesday’s trading session on the New York Stock Exchange.

Reports in recent months have speculated that any transaction would need to value the club at anywhere between £5bn and £9bn to persuade the owners to sell.

The Glazers listed a minority stake in the company in 2012 but retained overwhelming control through a dual-class share structure which means they hold almost all voting rights.

For more than 18 months, the club has been promising to introduce a modestly sized supporter ownership scheme that would give fans shares with the same structure of voting rights as the Glazers.

The initiative has, however, yet to be launched despite a pledge to have it operational by the start of the 2021-22 season.

It was one of a number of commitments made by Joel Glazer, United’s co-chairman, in the wake of the European Super League (ESL) debacle, in which the club played a pivotal role.

Manchester United was one of six Premier League teams to agree to join the project, which collapsed within hours of its official launch amid public and political acrimony.

In May 2021, Red Devils fans forced the postponement of a home match against rivals Liverpool after protesting against the ESL and the Glazer family.

"Love United, Hate Glazers" has become a familiar refrain during their tenure, with supporters critical of a perceived lack of investment in the club’s infrastructure while the owners have extracted hundreds of millions of pounds-worth of dividends as a result of its continued commercial success.

If a formal sale process is initiated, attention will turn to the identities of potential buyers.

Sir Jim Ratcliffe, the Ineos billionaire who has supported United since childhood, said in August that he was keen to buy the club but has since suggested that English football’s elite names are overvalued.

Billionaires from around the world will be linked to bids, as will sovereign investors seeking to emulate the kinds of takeovers seen at Newcastle United – now owned by Saudi state-backed investors – and Paris St Germain, which is Qatari-owned.

There will also be speculation that the Red Knights, a consortium led by former United director and leading economist Lord O’Neill, could revive an attempt initiated in 2010 to take control of the club.

Significantly, the prospective auction of Manchester United comes as Fenway Sports Group, the owner of Liverpool, also weighs selling all or part of the Anfield club.

Simultaneous sale processes for two of English football’s so-called ‘big six’ – the others being Arsenal, Chelsea, Manchester City and Tottenham Hotspur – would be unprecedented.

One analyst said the timing suggested that some investors believed the value of top clubs could be approaching its peak, especially against a backdrop of tough global economic forecasts for the coming years.

United’s announcement is also likely to be made during a World Cup fuelled by Gulf petrodollars, underlining the shifting financing of the global football industry.