Manchester United: How ‘scavenger’ Glazers bought club – and left Old Trafford ‘rusting’ and in a ‘mess’ 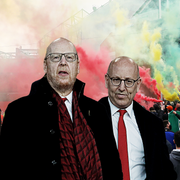 It’s nearly 20 years since the American tycoon Malcolm Glazer bought his first stake in Manchester United – now his family’s controversial tenure at the club could finally be coming to an end.

Chants of "Love United, hate Glazers" are regularly heard at Old Trafford and news that the owners are exploring a sale will delight many United supporters.

Here, Sky News tells the story of the Glazers’ ownership of the Premier League club and explains why the family have been so unpopular with fans – even attracting criticism from one of their own star players, Cristiano Ronaldo, who left the club with immediate effect earlier today.

Malcolm Glazer owned the Tampa Bay Buccaneers, an American football team that were then the Super Bowl champions, when he began his investment in United in March 2003.

At the time, United had dominated the Premier League and were one of the most successful clubs in the world, winning an array of silverware under Sir Alex Ferguson.

Glazer took full control of United in June 2005, but the deal was hugely unpopular with fans because it was financed primarily through loans secured against the club’s assets.

Within a year of the leveraged buyout, Glazer had two strokes and his six children – Avram, Joel, Bryan, Kevin, Darcie and Edward – ran United, all of them sitting on the board of directors.

The Glazers’ £790m takeover loaded United with debt that is now around £500m. The club were debt-free before the takeover.

Fans have been enraged by the more than £1bn it has cost the Glazers to service the debt, while cashing in themselves by receiving dividends from the club.

The Glazer family’s first visit to Old Trafford ended in ugly and violent scenes in June 2005 as police clashed with supporters who had effectively barricaded United’s new owners inside the stadium.

Joel, Avram and Bryan Glazer reportedly had to be smuggled down the players’ tunnel and out of the ground in two police tactical aid vans for their own safety.

FC United began their first season in 2005-06 and now compete in the Northern Premier League Premier Division, the seventh tier of the English football league system.

Success on the pitch

Under the continued management of Sir Alex, United initially remained successful under the Glazers’ ownership, winning five Premier League titles in seven seasons between 2007 and 2013.

But fans’ anger at the Glazers remained.

In 2010, United fans began donning yellow and green scarves to protest against the Glazers’ ownership.

United are known for their famous red shirts, but the club was originally founded, in 1878, under the name Newton Heath Lancashire and Yorkshire Railway Football Club, which played in a bold yellow and green strip.

At the height of the protests, former United player David Beckham put on a green and gold scarf that was thrown on to the pitch during his return to Old Trafford with AC Milan in 2010.

That night, Joel and Avram Glazer were inside the stadium but Beckham later distanced himself from the protest, saying the ownership of United was "not my business".

A group of wealthy supporters were expected to make a bid of about £1bn for United in 2010, despite United insisting the Glazer family owners would "not entertain any offers".

The Red Knights group, which included former Football League chairman Keith Harris and Goldman Sachs chief economist Jim O’Neil, said that one of its priorities was to reduce debt levels at the club.

The proposed bid was put on hold after the group said media speculation of "inflated valuation aspirations" had hampered its plans.

Despite appointing high-profile managers such as Jose Mourinho and Louis van Gaal, the club has failed to win the Premier League since 2013 – while spending more than £1bn on players in that time.

United have also not won a trophy since their Europa League triumph in 2017.

Malcolm Glazer died in 2014 at the age of 85, having never visited Old Trafford during his ownership of the club.

Although he was a controversial figure in Manchester, tributes poured in from the US, where the businessman was hugely respected for turning Tampa Bay from a laughing stock into a Super Bowl-winning franchise.

After Glazer’s death, NFL commissioner Roger Goodell said: "Malcolm Glazer was the guiding force behind the building of a Super Bowl-champion organisation.

The Glazers attracted more fury from United fans after taking a leading role in attempts to form a European Super League last year.

United, along with Liverpool, Manchester City, Arsenal, Chelsea and Tottenham, caused outrage with their plans to join the breakaway competition, in which the founding members would be exempt from relegation.

The six English clubs had planned to set up the league with Spanish sides Atletico Madrid, Barcelona and Real Madrid and Italy’s AC Milan, Inter Milan and Juventus, in a group that some nicknamed the "dirty dozen".

The proposal led to protests from football fans across England, with several hundred storming the Old Trafford pitch before United were due to play Liverpool, meaning the game had to be postponed.

After the clubs backed down Joel Glazer, who had been announced as a vice-chairman of the European Super League, "apologised unreservedly" to fans, saying: "We got it wrong."

His brother Avram refused to apologise after Sky News confronted him in Florida.

After the scandal, United’s executive vice-chairman Ed Woodward announced he would be leaving the club, having been an unpopular figure with fans after a series of expensive signings with precious little success.

Former Man United captain Gary Neville – who was a player at the club in 2005 when the Glazers took over – has been a vocal critic of the owners in recent months.

"We have got to come together," he told Sky Sports.

"It might be too late, there’ll be people at Manchester United, fans 15 years ago who will say it’s too late.

"It’s never too late, we have got to stop this. It is absolutely critical we do."

Neville has claimed Old Trafford is "rusting", with £1bn needed to rebuild the stadium, and the club is in a "mess".

"When a business is failing and it’s not performing, it is the owners of that business [who are to blame]," Neville said after United were beaten 4-0 by Brentford this season.

"It is really simple. It is failing miserably.

"They took about £24m out of the club two months ago and they have now got a decrepit, rotting stadium, which is second-rate when it used to be the best in the world 15-20 years ago.

"You have got a football project where they haven’t got a clue."

Neville said there has been a "toxic culture and atmosphere created at the club over a 10-year period" after the departures of Sir Alex and former United chief executive David Gill.

"It is a mess and it cannot carry on," he added.

The latest high-profile criticism of the Glazers came from one of Manchester United’s very own star players.

Ronaldo launched a blistering attack on the club’s owners during an interview with Talk TV host Piers Morgan.

The Portugal star, who returned to United last year after 12 years away, claimed the Glazers "don’t care about the club" and said it was a "marketing club".

"They will get money from the marketing – the sport, it’s, they don’t really care, in my opinion," he said.

Ronaldo also claimed United had not progressed as a club since the departure of Sir Alex in 2013.

"Nothing changed. Surprisingly," he said.

"Not only the pool, the jacuzzi, even the gym… Even some points, the technology, the kitchen, the chefs, which is, I appreciate, lovely persons.

"They stopped in a time, which surprised me a lot. I thought I will see different things… different, as I mentioned before, technology, infrastructure.

Since the interview last week, the club’s lawyers had reportedly been looking at ways to bring Ronaldo’s time at the club to an end and on Tuesday it was announced that he was leaving "by mutual agreement, with immediate effect".

Talk of sale and interest from Britain’s richest man

Bloomberg reported in August that the Glazer family were considering selling a minority stake in United and preliminary discussions had been held about bringing in a new investor.

It also emerged that one of Britain’s richest men, Sir Jim Ratcliffe, a boyhood United fan and a proven investor in sport through his Ineos company, had expressed an interest in buying the club.

In October, he revealed he had met the Glazer family and was told they were not interested in selling Manchester United.

"I met Joel and Avram, and they are the nicest people," Sir Jim said.