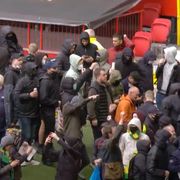 Angry Manchester United fans are staging a protest against the club’s owners after getting inside their Old Trafford stadium.

Thousands of supporters had gathered outside to demonstrate ahead of Liverpool’s visit this afternoon following the club’s failed attempt to join the controversial European Super League.

Earlier, fans were also seen letting off flares and blocking the entrance to the team’s hotel in Manchester.

And now it is reported the referee has not been able to get out of his car and into the ground, casting doubt over whether the Premier League clash will go ahead as planned at 4.30pm.

Sky correspondent Frazer Maude said there was "no sign" of the players leaving their hotel yet – about half an hour after they normally would have left.

He said there was no reason for the match to be postponed on COVID safety reasons since the changing rooms were not accessed by supporters.

But, he added that ground staff would need to spend some time checking the pitch to ensure there were no sharp objects or remains of flares left behind.

Manager Ole Gunnar Solskjaer had backed fans’ right to protest but urged them to do it peacefully.

The anti-Glazer movement has gained huge momentum in recent weeks following their failed attempt in April to form part of a breakaway Super League.

About 10,000 supporters had been expected to descend on Old Trafford before the Premier League match which is due to start at 1630.