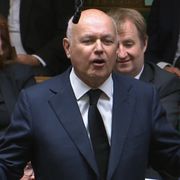 A man accused of assaulting former Tory leader Sir Iain Duncan Smith with a traffic cone has been cleared by a judge.

Sir Iain described being followed by a group of protesters shouting and banging a drum on 4 October 2021 in Manchester, before a cone was "smacked down" on his head.

The politician said he feared for his wife and friend when a cone was put on his head and protesters hurled abuse at him during the 2021 Conservative Party Conference.

Sir Iain was leaving a conference in the Midland Hotel and was on the way to speak at the Mercure Hotel, when he was attacked, repeatedly sworn at and labelled "Tory scum", he told Manchester Magistrates’ Court.

CCTV footage which allegedly identified Elliot Bovill, 32, as the person who put the traffic cone on the MP’s head was shown to the court.

Yet the evidence was declared "weak" and "tenuous" by district judge Paul Goldspring on Tuesday, who concluded there was no case to answer.

Radical Haslam, 29, from Douglas Street, Salford, and Ruth Wood, 51, from Oak Tree Avenue, Cambridge, were along the co-defendants trialled and both denied verbal abuse with intent to harass Sir Iain.

Wood, who manages a project for a homelessness charity, denied calling the group "c****", saying it was "problematic terminology" she would not use and that she did not see who put the cone on Sir Iain’s head.

When questioned further about the cone, Wood said: "It seemed to me at the time like a practical joke. It was a surprise because I wasn’t expecting it.

"There was nothing particularly threatening about what we were doing, in my mind

"Not once did he turn round or try to tell us to stop. It just didn’t seem to me as if they were concerned at all."

Radical Haslam said he witnessed the cone incident but that he also had "no idea" who was responsible.

The judge determined the CCTV footage to be poor quality and affected by a glare, saying: "It seems to me there are a number of difficulties with the identification that had been made."

Mr Goldspring continued: "In my view, the identification evidence is weak, it’s tenuous, and it is completely unsupported by any other evidence."

Katrina Walcott, the lawyer representing Mr Bovill’s case, said she accepted the detective made the identification "in good faith" but his "honestly held belief" that the man in the footage was Mr Bovill was not good enough.

The judge awarded Mr Bovill £37 in costs to cover the travel expenses during the prosecution.