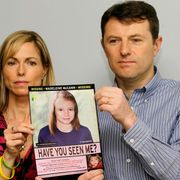 Madeleine McCann’s parents have said they welcome the news that convicted child abuser Christian B has been named an official suspect in the case of their daughter’s disappearance.

In a statement signed "Kate & Gerry", the couple also said they hold out hope that Madeleine is still alive despite German police treating the case as a murder investigation.

Christian B is suspected of killing Madeleine, who was three at the time of her disappearance, after allegedly abducting her from a holiday apartment in Praia da Luz, Portugal, in May 2007.

Kate and Gerry McCann’s statement reads: "We welcome the news that the Portuguese authorities have declared a German man an ‘arguido’ in relation to the disappearance of our beloved daughter Madeleine.

"This reflects progress in the investigation, being conducted by the Portuguese, German and British authorities. We are kept informed of developments by the Metropolitan Police.

"It is important to note the ‘arguido’ has not yet been charged with any specific crime related to Madeleine’s disappearance.

"Even though the possibility may be slim, we have not given up hope that Madeleine is still alive and we will be reunited with her."

The statement comes a day after prosecutors in the Algarve city of Faro, without naming Christian B, said a person was made an "arguido" by German authorities at the request of Portugal’s public prosecution service.

In Portuguese law, arguido status can be a preliminary move ahead of an arrest being made or charges brought.

However, the decision is said to have been prompted by the 15-year limit for prosecuting serious crimes in Portugal, with authorities looking to "keep their options open".

The statute of limitations would have meant Christian B could no longer be charged in the country after 3 May.

German prosecutor Hans Christian Wolters told Sky News the move was "apparently only for formal reasons, to prevent a statute of limitations in Portugal".

Analysis: Christian B isn’t the first official suspect in disappearance – but may be the last

A Portuguese source added: "The legal grounds for making [Christian B] an arguido include the fact that he allegedly confessed to a friend he had snatched Madeleine and mobile phone records placed him in Praia da Luz the night she vanished."

Christian B, whose surname is not given due to Germany’s strict privacy laws, stayed silent after being informed he was a formal suspect and declined to be questioned, according to the source.

The suspect, who is in his 40s, travelled between Praia da Luz and Germany in a VW camper van for several years before Madeleine vanished and previously said he survived by dealing drugs.

It is understood German investigators are focusing their forensic work on the vehicle.

Christian B became a suspect after allegedly confessing to kidnapping Madeleine while sitting in a German bar on the 10th anniversary of her abduction.

He is currently serving a seven-year sentence in Germany for the rape of a 72-year-old woman in 2005 in the same town where Madeleine went missing two years later.

A federal court in Karlsruhe, a city in southwest Germany, rejected an appeal against the conviction in November 2020.

Portuguese authorities insisted earlier this month that they would continue to investigate Madeleine’s disappearance despite reports that Scotland Yard was planning to end its probe after 11 years.

The Metropolitan Police continue to treat Madeleine’s disappearance as a missing persons inquiry.