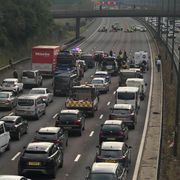 Fifteen climate change protesters have been arrested after parts of the M25 were blocked off for the second time in three days, causing huge queues of traffic.

The group is demanding government action on home insulation, tweeting: "#InsulateBritain are back. @BorisJohnson can you hear us yet?"

Surrey Police said it had arrested 15 people after attending Junction 8 and 10 of the M25 overseeing a protest which was reported at around 8am.

"A number of protesters from Insulate Britain and Extinction Rebellion are at the two locations and appropriate diversions are being set up with the help of partner agencies. We have currently made 15 arrests," the force said.

One Twitter user, Phillip Marvel, said the protesters were "at it again" adding: "Children stuck on school buses, ambulances can’t get through. This is not helping their cause."

Insulate Britain said 89 of its members took part in the action on Wednesday, adding in a statement: "We demand credible action now.

The group tweeted that one of Wednesday’s activists included an 82-year-old man "with a severe heart condition".