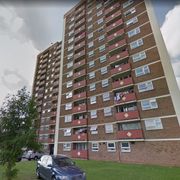 A man fell to his death from a burning high-rise flat after police arrived to hunt a suspected arsonist living there.

Detectives had been investigating three attempted arson attacks on local properties in the early hours of Wednesday and used CCTV footage to identify a suspect living on the 14th floor of a flat in Green Court, Luton, Bedfordshire.

Five officers were sent to the home, in a 15-storey block, at around 4am on Thursday but arrived to find the entrance on fire.

They tried to get inside to rescue the man but were overcome by the flames, police said.

One of the officers suffered serious burns and remained in hospital on Friday.

The others were treated for "minor injuries and smoke inhalation" and discharged.

Emergency services were called to the scene but police said the "fire took further hold of the flat" before the man, in his 50s, fell from a window and died.

He had not been formally identified by Friday afternoon.

Police have contacted the next of kin of the person they believe him to be, while the matter has been referred to the Independent Office for Police Conduct.

Assistant Chief Constable Sharn Basra said: "This is a tragic case and we are working hard to establish all of the facts of what took place.

"Our focus on Thursday was on identifying the man who had died and tracing his family members before we released any further information publicly.

"We have also been carefully recovering all possible evidence from the scene and assisting residents who had been displaced from their homes.

"What is clear from the evidence collected so far is the bravery of the attending officer, who tried to fight through the flames to save the man inside.

"Our thoughts remain with both him as he recovers in hospital and the loved ones of the man who sadly died."

More than 100 residents were evacuated from the building on Thursday morning, with the majority allowed back into their flats by the evening.

Anyone with information which may aid the investigation is asked to call 101 or get in touch with police through beds.police.uk/ro/report, quoting Operation Cheagle.