Line Of Duty series six final episode: All Ted Hastings’ AC-12 investigations have led to this – as finale finally gives us answers 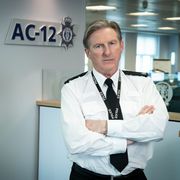 WARNING: THIS ARTICLE CONTAINS SPOILERS FOR THE LATEST EPISODE OF LINE OF DUTY, SEASON SIX, EPISODE SEVEN, AS WELL AS PREVIOUS SEASONS. DO NOT CONTINUE READING IF YOU ARE NOT UP TO DATE. YOU HAVE BEEN WARNED

"This thing has been driving me mad for years!" says a frustrated Superintendent Ted Hastings. Us too, Ted! Us too. But now, finally, we have some answers on the identity of H.

Season six of Line Of Duty ended with our fractured AC-12 heroes back together, albeit in a silent, awkward-looking lift journey to the bottom of HQ if not riding joyously off into the sunset.

This was no happy ending, but at least they’re all alive; with the "lies cost lives" tagline hanging over this season, writer Jed Mercurio had put the fear of God into fans thinking one of the trio – Hastings, Kate Fleming and Steve Arnott – could be a goner.

Millions of fans have been tuning in each week in the hope that the truth about the clandestine network of bent coppers and the man (or woman) pulling the strings – known as H – would finally be revealed after six seasons, almost a decade after the show first aired.

"Every investigation has led to this," the trailer teased. But after so much build-up, did it deliver?

For the DIR, here are the key findings from series six, episode seven of Line Of Duty.

So it turns out that H, the fourth man, wasn’t in fact a criminal mastermind but Central Police’s most incompetent leader, DSU Ian Buckells. "Come off it, no way," says Kate. "This can’t be right," says Steve. "Um, are you sure, Chloe?" says Ted, when presented with the "definate" evidence, unable even to muster up a "Mother of God".

Buckells was already in prison under suspicion of being in league with organised crime, but appeared to have been framed. Now, his spelling has finally caught up with him and a laptop discovered in his cell proves he is the one who has been communicating with the OCGs and Acting DSU Jo Davidson all this time, even though Davidson really did think she was framing him. Got it?

Rather than being the evil genius AC-12 thought they were dealing with, Buckells, it turns out, was just a low-life hungry for the high life, despite his outward appearance of "crap suits, dad cars", burns Kate.

Did he order the abduction of Jo and the attempted murder of Kate? The murders of journalist Gail Vella and solicitor James Lakewell? "No comment," of course. But he can’t resist talking when Ted calls him a blundering fool: "I’m only the one who’s made total mugs out of you lot."

Later on, however, the tables are turned when Vella’s murder comes up again. Vella had been digging into the deliberately botched investigation into the murder of Lawrence Christopher, a black man who had died in police custody, which Buckells and the now Chief Constable, Philip Osborne, were both on the team for back in 2003. Did Buckells and Chief Constable Osborne collude in a conspiracy to murder Vella?

It’s a lose-lose! "No one makes mugs of AC-12," mic drops Ted, and the nation cheers. Sort of. We don’t hear what Buckells decides to reveal, and Osborne remains in power. Hopefully this leaves things open for a yet to be confirmed season seven.

Who did Jo think her dad was?

In the penultimate episode, we learned Davidson had been doing the bidding for organised criminals because she had been born into a family of criminals: she is original series one head honcho Tommy Hunter’s niece and, as it transpired, also his daughter. Yes, that’s niece and daughter. But she had never previously known the nature of her parentage, having been led to believe her father was a bent copper.

After a faked prison move and an attempted ambush on the van, intercepted and thwarted by Kate and Steve, Davidson is questioned and says that the man she thought was her father controlled her, before revealing his identity: Patrick Fairbank, a disgraced retired officer introduced in season three, who not only covered up abuse at a boys home, but also took part in it.

Now suffering from mental health problems, it is not clear how much he really cannot remember of his criminal past.

After giving AC-12 his name, we learn at the end that Davidson is finally free of her roots and living in witness protection in a lovely stone cottage in a classified location somewhere leafy, and with a dog! That’s one happy ending at least.

After digging up the OCG workshop floor, a strongbox containing a gun and gloves revealed that it was indeed prime suspect member Carl Banks who murdered the journalist – meaning Terry Boyle, who had been framed for her death, is officially cleared.

Is the AC-12 gang really back together?

Kate has been out of the anti-corruption team this series, working on the very murder squad under suspicion, alongside Davidson and Buckells.

But snaring Buckells has brought her back into the AC-12 fold. Will she decide to go back? Mercurio has decided to ramp up the emotion. "Someone’s got to keep you lot in line," she tells Steve. "You don’t realise what you’ve got until it’s gone."

But is it too late? AC-12 is being merged with other units, with big budget cuts, and gaffer Ted Hastings appealing his enforced retirement.

Mercurio may have tied up a lot of loose ends with this series, but surely the AC-12 three need at least one more outing to go out on a high… or a dramatic end.

What about Steve’s bad back?

Called in to see occupational health due to all the painkillers he’s been popping since being thrown down a stairwell by a balaclava man in season four, Steve is forced to give up his firearm. He can still use a Taser though! As the OCG found out during the attempted prison van ambush.

A later scene reveals Kate is also having meetings with occupational health, to help police officers experiencing stress and pain. "I’m lucky, she says of her colleagues. "I’m working with one of the best. To be honest, I don’t know what I’d do without him."

And the £50k stash Ted Hastings gave to Steph?

Earlier in the series, Steve discovered Ted had given Steph Corbett, widow of John Corbett, half of the £100,000 in cash that he had unwittingly received when being set up in season five. He also discovered that Ted had told imprisoned OCG member Lee Banks (brother of Carl) that they had a rat in their group, inadvertently leading to the deduction it was Corbett and ultimately his killing.

When Steve and Kate confront him, he says he had hoped the rat information would bring Corbett, who had gone to ground, back in contact, not lead to his death. "If there is one thing I could take back, it would be that," he says, his voice breaking. "What a terrible thing I did." Giving the money to Steph was Ted’s way of atoning.

Later, Ted discloses the information to smug DCS Patricia Carmichael, because unlike some he never stopped caring about honesty and integrity. But will this be his downfall?

So how did it all wrap up?

Not well. AC-12 might have just solved the force’s most high-profile murder and closed the biggest anti-corruption operation in its history, but despite their efforts, restructuring of anti-corruption units continues, with close colleagues of the Chief Constable appointed to senior positions! And the force has applied for public interest immunity in legal proceedings against Ian Buckells, which means, if successful, evidence relating to institutionalised corruption would not be heard in court.

We end with the line that AC-12’s powers to prevent wrongdoing in public office have never been weaker. Mother of God! Surely this means they have to come back fighting? Over to you, Mercurio.