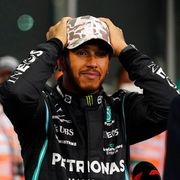 Lewis Hamilton has won a council battle to chop down a tree at his west London mansion, despite a number of objections from his neighbours.

The world-beating Formula One driver has been given permission to cut down the magnolia tree at his £18 million home in the Royal Borough of Kensington and Chelsea (RBCK), after his tree surgeon said it was almost dead and in "terminal decline".

Hamilton’s tree in question is not covered by a protection order, but is in a conservation area, sparking complaints from those living nearby.

The former world-champion was said to have purchased the property five years ago, but residents have previously said that Hamilton has "never set foot in it".

According to the Local Democracy Reporting Service, one objector said that the "removal of trees like these can only be to the detriment of the area", with another remarking: "These trees have been there for over 100 years and are part of a magnificent landscaping legacy in this precious conservation area."

Another complaint told the council the "magnificent, heritage" trees could be seen from aircraft approaching Heathrow, and they were worried the trees were being felled to "create more room for building works".

Locals also disagreed with the assessment of tree surgeons who said that tree was in poor condition, while a written objection asks Hamilton to consider his "already high carbon footprint instead of further increasing it by destroying nature."

The property itself, which sits in one of the most affluent boroughs in the country, has seen a range of work carried out since it was purchased in 2017, including the addition of metal gates outside the property and the demolition of an old summer house.

He was also previously granted permission to cut back a horse chestnut tree, which won support of a next-door neighbour, who had said it was attracting pigeon droppings onto their property.

Hamilton will be required to replant a new tree, as per the conditions of the planning decision.

All this has gone on while Hamilton continues his bid for Formula One glory once again, after controversially losing last season’s title to Max Verstappen in the final laps of the last race.

Hamilton is now preparing for his next race in Miami, after placing 13th at the Emilia Romagna Grand Prix last weekend,.