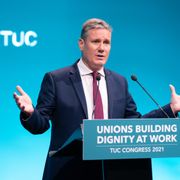 Sir Keir Starmer has wooed trade unions with the promise of a "new deal for workers" and stories about his father’s life on the factory floor.

In a speech to the TUC conference in London, the Labour leader promised a raft of new rights for workers – including a new pledge of higher sick pay – from day one in a job.

He promised a Labour government would introduce:

• Rights for all workers, including holiday pay, parental leave and protection from unfair dismissal from day one

• An end to zero hours contracts

"I would deliver a new deal for working people based on security at work, quality jobs, a fairer economy, opportunity for all and work that pays," he said.

"Taken together, it would transform working life in Britain and make it the best place to work."

And he told the TUC: "When I think about a new deal for workers, I think of my dad.

"He worked on the factory floor all his life.

Sir Keir added: "Despite being a skilled toolmaker throughout his working life, my dad thought people looked down on him because he worked on the factory floor. He was right about that."

But Sir Keir’s account of toolmaker Rodney Starmer’s working-class credentials is likely to be challenged.

A recent biography of the Labour leader claimed his father was not an employee, but self-employed and ran his own business as a sole trader.

Spelling out his proposals, which are broadly similar to those of his predecessor Jeremy Corbyn at the 2019 general election, Sir Keir said: "Labour would immediately increase the minimum wage to at least £10 an hour.

"We would also ensure a greater role for unions in boosting pay, with more workers covered by collectively agreed deals.

"Next, we would tackle insecurity and uncertainty at work.

"A job you can raise a family on must offer a solid foundation on which you can build your life, not worrying about how many hours you’ll be given next week or how you’ll pay the bills if you fall ill.

"Labour’s New Deal will provide that security by ensuring basic rights for all workers from day one in the job: including holiday pay; protection from unfair dismissal; and guaranteed sick pay.

"We have one of the lowest rates of sick pay in Europe. It’s not good enough.

"So as well as guaranteeing sick pay in Labour’s new deal, we’ll increase it as well.

"Better pay and conditions must come with job security.

"That’s why we would ban zero hours contracts and replace them with regular contracts which actually reflect the hours normally worked."

Praising union members who worked throughout the pandemic, Sir Keir said: "But what has the government done for our key workers? One in 10 at risk of fire and rehire, a cut of £1,000 a year in the incomes of working families on Universal Credit.

"A broken promise on National Insurance raising taxes on working people; inadequate sick pay putting workers in the impossible position of choosing between going to work and feeding their family or isolating at home and protecting our public health; and an unjust pay cut for our key workers in the public sector.

"Carers, teaching staff, police officers – this is the thanks you get from the Tories.

"The government wasted billions of pounds of taxpayer cash on dodgy contracts, vanity projects, and giveaways to their mates.

"They cut stamp duty for second home-owners and super tax deductions for the biggest companies.

"They’re putting up taxes for Amazon workers, but allowing Amazon to squirrel profits away in tax havens."

"This pandemic has exposed the inequality and insecurity at the heart of our labour market. No one should be pushed into financial hardship if they fall ill at work.

"Keir today promised that the next Labour government will increase statutory sick pay and make sure everyone has access to it – including the lowest-paid workers.

"During the pandemic, too many couldn’t afford to self-isolate because sick pay is too low, or they aren’t eligible for it at all. This badly undermined our public health effort during COVID.

"It’s great to see Keir Starmer backing a ban on zero-hours contracts and calling for workers across the country to get day-one rights at work."