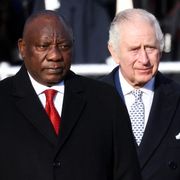 Cyril Ramaphosa‘s two-day trip is part of attempts by the UK to boost its relations with its biggest trading partner in Africa.

The pomp and ceremony began with the King and Queen Consort and the Prince and Princess of Wales attending a ceremonial welcome at Horse Guards Parade, in central London.

As Mr Ramaphosa was greeted by the King, gun salutes were fired across London.

This marks the first state visit to the UK by a world leader since former US President Donald Trump and his wife Melania met the Queen in 2019.

Mr Ramaphosa was joined by the King, who walked a few steps behind his guest, as he inspected Foot Guards from Number 7 Company The Coldstream Guards.

A state carriage procession then took the president, the King and Queen Consort and the Prince and Princess of Wales along The Mall to Buckingham Palace for a private lunch.

During Mr Ramaphosa’s trip he is scheduled to visit Westminster Abbey to lay a wreath at the Tomb of the Unknown Warrior and see the memorial stone for former South African President Nelson Mandela.

He will also address MPs in parliament and discuss trade and investment with the prime minister.

Rishi Sunak said: "South Africa is already the UK’s biggest trading partner on the continent, and we have ambitious plans to turbocharge infrastructure investment and economic growth together."