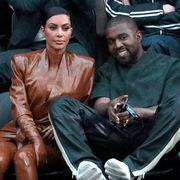 If you became a billionaire, you’d probably expect your partner to respond accordingly, by treating you to a luxury holiday or maybe a sports car.

But Kanye West does things differently.

On learning that his wife, Kim Kardashian West, had entered the exclusive club after Coty bought a $200m (£162m) stake in her KKW Beauty brand, he posted a tweet featuring a bizarre message, flowers and vegetables.

Coty, the US cosmetics giant, has bought a 20% stake in KKW Beauty, valuing the reality TV star’s three-year-old business at $1bn (£815m).

Rapper and designer West, who also goes by Ye and has become known for making gnomic statements on social media, wrote: "I am so proud of my beautiful wife Kim Kardashian West for officially becoming a billionaire.

"You’ve weathered the craziest storms and now God is shining on you and our family So blessed this is still life So I made you this still life We love you so much."

The message, which some described as a poem, was accompanied by a picture of a pepper, a cherry tomato, a green tomato and a couple of flowers, one of which appeared to be a pink rose.

He was mocked on social media for apparently ignoring the US’s worsening economic plight due to coronavirus, with one tweeter saying "Cool dude. 45 million Americans are unemployed right now."

One told him he should "read the room" at a time "where there’s widespread unemployment and people literally struggling."

Almost half of Americans (47.2%) are currently jobless as a result of shutdowns enforced due to COVID-19, the US Bureau of Labor Statistics said on Monday.

Others who responded to West’s tweet lampooned the picture, asking why he had "turned kim into a green tomato".

The billionairess also posted a picture of herself, saying she was "blessed and forever grateful".

Kardashian West had leveraged her huge social media following to build up KKW Beauty, which was founded in 2017 and sells products including lip gloss, body foundation and perfume.

As part of the deal with Coty, the 39-year-old will still promote the business online and will help create new products.

Coty is clearly keen on the famous family’s ventures – as in November it bought more than 50% of the makeup line owned by Kim’s half-sister, Kylie Jenner.

Music star West, 43, who was himself officially named a billionaire by Forbes magazine in April, also announced a new album on Monday.

The magazine has valued his net worth at $1.3bn (about £1.06bn), which includes his stake in the Yeezy sneaker line, which Forbes described as "one of the great retail stories of the century".