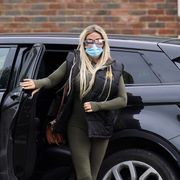 Katie Price faces a crown court trial and has been told she is in "grave danger of going to prison" after denying breaching a restraining order against her ex-husband’s fiancee over a message in which she is said to have accused the pair of having an affair.

The 43-year-old former glamour model is said to have sent Kieran Hayler a message on 21 January this year in which she is accused of branding his new partner, Michelle Penticost, a "c***ing w****" and a "gutter s***".

Price was banned from contacting Penticost directly or indirectly on 3 June 2019 under the terms of a five-year restraining order.

She was fined hundreds of pounds for hurling a "tirade of abuse" at her during a row in a school playground.

Price, wearing white trainers, a green tracksuit and a black gilet, appeared at Crawley Magistrates’ Court on Wednesday, accused of contacting Penticost indirectly in breach of the restraining order.

She was supported by her reality TV star fiance Carl Woods, 33, who sat in the public gallery.

The court heard that the alleged message to Hayler may have been triggered by an Instagram post by Penticost, which she denies was aimed at Price.

Price, who became a household name around the turn of the millennium, stood in the dock to confirm her name, address and date of birth, before pleading not guilty to the single charge, which can be tried in either the magistrates’ court or the crown court.

Joe Harrington, defending, said: "The issues relate to her mental health and the triggers which led to sending that message."

Asked where she wanted the trial to be heard, Price said: "The crown court please."

‘This is a very serious allegation’

District Judge Amanda Kelly said the offence carries a maximum sentence of five years in jail and warned Price: "You are in really grave danger of going to prison."

She said: "This is a very serious allegation in which it is alleged you used indirectly vile and nasty language towards Ms Penticost, someone you were prohibited from contacting directly or indirectly by a restraining order."

The judge granted Price bail ahead of a plea and trial preparation hearing on 25 May at Lewes Crown Court on condition she does not contact Ms Penticost either directly or indirectly, except for handing over children.

"It seems to me, Ms Price, that all of the children caught up in your relationships past and present need their adults to behave like adults," the judge said. "Stop exposing them to very public squabbles."