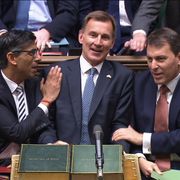 If you’re feeling a bit disorientated by the chancellor’s autumn statement, you’re not alone.

In just eight weeks, the government has shifted from wanting to roll out the biggest tax cuts in 50 years to taking the country’s tax burden to its highest level since the Second World War.

Liz Truss and her chancellor Kwasi Kwarteng wanted to slash taxes – announcing £45bn of unfunded tax cuts in September – only for their replacements Rishi Sunak and Jeremy Hunt to swing the pendulum the other way, with an autumn statement targeting £55bn of fiscal consolidation, plus tax rises of £25bn and spending cuts at £30bn.

We’ve lurched from the zeal of Ms Truss’s low tax, small state, trickle-down economics to the pragmatism of Mr Sunak, who claims he’s instinctively a fiscal Conservative but on Thursday oversaw an autumn statement that borrowed much from the opposition front bench.

Tax rises paid for by business and the wealthy had all the hallmarks of a Labour budget.

On spending, too, the Tories are prioritising extra money for the NHS (£6.6bn) and for schools (£4.6bn) over the next two years, paid for in part from the overseas aid budget.

And while public services will feel the squeeze in the coming year as inflation gallops ahead of allocated spending, most of the £30bn of spending cuts will be kicked into the next parliament, when the Tories might not even be in power, with day-to-day departmental spending £21.5bn less in 2027/8 than under previous plans.

"They’ve shot Labour’s fox," is how one senior economist put it to me, as Mr Hunt borrowed some of Sir Keir Starmer’s tax plans, put more money into public services and saved the spending cut pain until after the general election.

Mr Hunt also threw the gauntlet down to Labour as to how they’d pay for improved public services.

But the political skill of Thursday’s statement can’t detract from the hard reality of what people are about to face as the UK tips into recession and energy bills and inflation remain high.

UK households are set to suffer a 7.1% fall in living standards over the next two years.

It’s the largest decline in six decades and will take household disposable incomes back to levels not seen since 2013. A decade of growth wiped out.

That, coupled with below inflationary pay rises for public sector workers and tight budgets as inflation outpaces funding settlements for much of our public services, is going to hurt voters and no doubt test their relationship with a Conservative Party already more than 20 points behind in the polls.

Read more:
Key announcements at a glance
Millions to pay more in tax

A YouGov poll in The Times says 45 per cent of voters blame higher borrowing levels on the Conservative government, despite Mr Hunt’s best attempts to blame it on global factors.

And then there is the Tory party itself.

Mr Sunak was pilloried back in the summer by his then-leadership rival Ms Truss as the Conservative chancellor who lifted the country’s tax burden to a 70-year high. On Thursday, he went further, lifting it to a near 80-year high.

The signs of discontent rippled through the backbenches on Thursday. Richard Drax made the point, shared by many of his colleagues, that raising taxes risks stifling growth.

Bill Cash complained about the cost of HS2 and Therese Villiers asked the chancellor to cut taxes quickly if current forecasts about economic recovery and inflation proved to be overly pessimistic.

This an autumn statement from a chancellor and prime minister insisting it’s time to "face the storm".

On Thursday, both will be relieved that the announcement didn’t unsettle the markets, but the economic outlook is nothing but grim for the public and the government. The coming months could be very bumpy indeed.