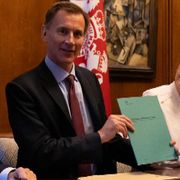 Jeremy Hunt will promise to weather an economic "storm" by raising taxes, cutting public spending and scaling back energy support to fill a £54bn black hole in the nation’s finances.

The chancellor will insist to MPs on Thursday that his autumn statement puts the UK on a "balanced path to stability" as he tackles the "enemy" of inflation, which has soared to a 41-year high.

But the measures could put him on a collision course with Tory MPs on the right of his party who are already voicing anger about the prospect of some of the plans.

Watch the autumn statement live on Sky News and in the Politics Hub from 11.30am.

An 11th hour petition from two dozen Tory MPs, led by Jonathan Gullis, has been sent to the chancellor asking him not to hike fuel duty in the statement.

The package will be in the form of £30bn of spending cuts and £24bn in tax rises over the next five years – a stark contrast to Kwasi Kwarteng’s unfunded tax-slashing spending splurge two months ago.

Among the measures, annual energy bills for a typical household will stay capped at £2,500, but this will rise to £3,000 in April 2023, when support will become more targeted with additional payments for low-income households and pensioners, Sky’s political editor Beth Rigby understands.

On tax rises, those with the broadest shoulders will bear most of the burden, but there will be pain all around.

This is a marked difference to Liz Truss’s plans to scrap the 45p rate altogether, giving the highest earners an average tax cut of £10,000.

Analysis says lowering the threshold will bring an extra 246,000 people into the highest bracket at a cost to them of around £580 each a year, which in turn would raise the Treasury £1.3bn a year.

Mr Hunt is also expected to announce a freeze on personal income tax and national insurance tax thresholds lasting until 2028.

Mr Hunt has already hinted he will make it easier for local authorities to increase council tax, with reports suggesting the threshold for raising bills without a referendum could increase from 2.99% to 5%.

There is also expected to be a big increase in the windfall tax on energy companies, and a new tax on electricity generators.

Labour has previously said a windfall tax extension could raise an additional £50bn, and criticised what it calls the "loophole" that allows gas and oil firms to offset their tax liability if they invest back into the UK.

On spending cuts, departments are expected to be told to live within an envelope of the March Spending Review, when inflation at was 3%.

With inflation now at 11.1%, that amounts to a real-terms cut across the board, meaning tough choices will be necessary.

However, there will be some exceptions, with the NHS expected to get more money.

There is also likely to be some protection for the schools budget, Sky’s deputy political editor Sam Coates understands.

"There will inevitably be some good news after the weeks of doom-laden warnings," he said.

However, the prime minister told Sky News on Tuesday that "fairness and compassion" will be at the heart of his decisions.

It is understood the chancellor will keep the triple lock for pensioners in his autumn statement – honouring a manifesto commitment.

He is also expected to uprate benefits in line with inflation, rather than earnings (a controversial move that would have saved £5bn).

The government has not confirmed what measures will be in the statement, but there has been a constant stream of measures reportedly being considered.

This "pitch rolling" helps markets get an idea of what is coming down the road and avoids spooking traders.

When Ms Truss and Mr Kwarteng made several surprise announcements in their mini-budget in September, it contributed to the financial chaos which saw the pound crash and the Bank of England forced to intervene to prevent pension funds from collapsing.

Analysis released on Monday by the independent Resolution Foundation think tank found the mistakes they made cost the UK £30bn, doubling the sum the Treasury says will have to be raised.

Mr Hunt will say that his "difficult decisions" are necessary to keep mortgage rates low and tackle the rocketing energy and food prices intensifying the cost of living crisis.

"Families across Britain make sacrifices every day to live within their means, and so too must governments because the United Kingdom will always pay its way," he is expected to say.

But Tories on the right of the Conservative Party are already voicing anger about the prospect of raising taxes.

Among the Tory critics, former cabinet minister Esther McVey has warned she will not support tax rises without the scrapping of the "unnecessary vanity project" of HS2.

Former business secretary Jacob Rees-Mogg told ITV’s Peston he would vote for the budget so as to not bring the government down, but warned he opposes tax increases, which he believes "risks making a recession worse".

Labour has also warned that Britain is "falling behind on the global stage".

Shadow chancellor Rachel Reeves said: "The country is being held back by 12 years of Tory economic failure and wasted opportunities and working people are paying the price.

"What Britain needs in the autumn statement are fairer choices for working people, and a proper plan for growth."

And Sharon Graham, the general secretary of the Unite union, warned Mr Hunt "workers are ready to take a stand".

"He can choose to inject investment into the NHS and deliver a fair pay deal – or he can leave it as it is today, in danger of fatal collapse," she said.