Japan: Tour boat with 26 aboard sinks with no sign of survivors after several hours 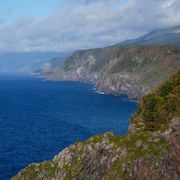 A tour boat with 26 people – including two children – aboard has sunk with no sign of survivors after several hours, Japan’s coastguard has said.

The 19-ton Kazu1 made an emergency distress call in the early afternoon, saying the bow of the ship had been flooded and was beginning to sink and tilt.

The crew also said those on board were wearing life jackets and the boat was keeling at a 30-degree angle.

It was travelling off the western coast of Shiretoko Peninsula, in the northern island of Hokkaido.

There has been no contact from the boat since.

It was carrying 24 passengers, two of which were children, and two were crew members.

Six patrol boats and four aircraft have been dispatched to the area in the search for any survivors.

High waves and strong winds were observed in the area around 12pm, a local fisheries cooperative said.

Public broadcaster NHK said there was a warning for high waves up to 9ft high.