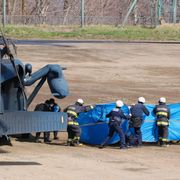 All 10 people who were on board a missing tour boat in Japan are confirmed to have died.

The boat went missing on Saturday with 26 people on board during a cruise off the main northern island of Hokkaido.

The country’s coastguard has now told NHK public television that the missing people were found in the Shiretoko Peninsula and taken to hospital, but they did not survive.

Average sea temperatures in Shiretoko National Park at this time of year are just above freezing.