Jamie Wallis, Tory MP for Bridgend, charged over failing to stop after a car crash 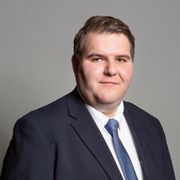 Tory MP Jamie Wallis has been charged with failing to stop and driving without due care and attention following a car crash in November last year, South Wales Police said.

The MP for Bridgend is due to appear before Cardiff Magistrates’ Court on Tuesday 10 May.

Last month, Mr Wallis announced he is trans and has been diagnosed with gender dysphoria.

Speaking on Sky News’ Ridge on Sunday in an exclusive interview last week, the Conservative MP said he hopes to begin the process of transitioning "as quickly as possible" and hailed the "incredible amount of support" he has received.

Mr Wallis acknowledged the transition process will be "challenging and difficult" with "lots of hurdles", saying: "It’s not going to be done overnight, it’s going to take many, many years."

But, he added: "I think now that I am out and people do know, I’m free to start that and actually go on that journey at a pace that I find comfortable."

He said he spent a lot of time trying to hide who he was and "sort of run away from it", not letting people know how he felt.

Following his announcement, Mr Wallis was widely praised for his bravery by MPs from across the political spectrum, including from Prime Minister Boris Johnson who said his message "would have taken an immense amount of courage".

Mr Wallis won his seat in December 2019, managing to oust Labour’s Madeleine Moon who had held the constituency for 14 years.