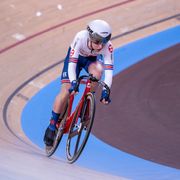 Five-time Olympic cycling champion Dame Laura Kenny has revealed she had a miscarriage in November and an ectopic pregnancy two months later.

In an Instagram post, Kenny, 29, said she fell pregnant immediately after the Tokyo Olympics but miscarried at nine weeks in November when commentating at the track champions league.

She said her and her husband, fellow Olympian Jason Kenny, were "chuffed to bits" when they found out they were pregnant.

Following the miscarriage, Kenny said she had "never felt so lost and sad" and "it felt like a part of me had been torn away".

"Since the Olympics we haven’t had much luck and it’s been the hardest few months I’ve ever had to go through," she added.

The mother-of-one, was part of the British team which won silver in the women’s pursuit at the Nations Cup in Glasgow on Thursday, but revealed the personal difficulties she had overcome in order to compete.

Following the miscarriage, Kenny went on to reveal she also had one of her fallopian tubes removed in January due to an ectopic pregnancy.

She explained that she caught COVID but wasn’t displaying normal symptoms and went to hospital.

A day later she was in A&E.

"I’ve always known I was tough, but sometimes life pushes you to an unbearable limit. If it wasn’t for Jason and Albie getting me through the day I’d have been broken", she added.

She and husband Jason Kenny have a son, Albie, who was born in August 2017.

The cyclist also gave her backing to comments this week from GB team-mate Katie Archibald, who criticised sport’s governing bodies over how they have handled the issue of transgender inclusion.