‘It’s nice to make a bit of history’: Mother becomes first in UK to use greener pain relief gas in labour 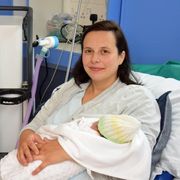 A climate-friendly form of pain relief has been used for the first time in the UK by a woman giving birth.

Entonox, better known as gas and air, has been used to provide pain relief during labour for over a century.

It is made from a mixture of nitrous oxide and oxygen, but nitrous oxide is a powerful greenhouse gas – almost 300 times more potent than carbon dioxide.

Every time it is exhaled, the gas escapes into our atmosphere.

Kaja Gersinka was able to use a new device, known as a Mobile Destruction Unit (MDU), which "cracks" exhaled nitrous oxide into harmless nitrogen and oxygen.

She used the MDU while giving birth to her daughter, Rosie Martha O’Sullivan, weighing 6lb 6oz, at the Newcastle Birthing Centre on 9 September.

Afterwards, Ms Gersinka said: "I didn’t expect this when I came here today – I just came to have my baby – but I started on the traditional machine and then swapped over.

"It was quieter and much more comfortable to hold – it’s nice to make a little bit of history."

As well as being greener, the technology – which was developed by Medclair – benefits staff by reducing the amount of nitrous oxide they are exposed to while they work.

Chris Allen, sustainable anaesthesia fellow at Newcastle Hospitals, said: "Rolling this technology out across our maternity unit can help us to continue to support women to use gas and air during labour, whilst making it as environmentally friendly as possible."

Rosie, who was delivered by midwife Lindsay Craney, is Ms Gersinka and Craig O’Sullivan’s second child. They already have a two-year-old daughter, Cassie.