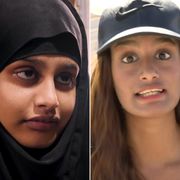 Shamima Begum’s appeal over the removal of her UK citizenship for joining Islamic State begins in a London court today.

She ran away from her London home as a 15-year-old with two other girls in 2015, ending up in Syria and marrying one of the terror group’s fighters.

Ms Begum was found pregnant in a Syrian detention in 2019 and her citizenship was revoked for national security reasons.

She’s set to base her appeal on claims that she was a victim of child trafficking because she was allegedly smuggled into Syria by a Canadian spy.

The claims were made in a book that said a double agent got them into the country and that his role was covered up by police and the UK government.

Her appeal will be heard by the Special Immigration Appeals Commission and is expected to last five days.

Ms Begum has denied involvement in any terror activities when she was living in Islamic State’s former heartland.

The UK Supreme Court last year denied her permission to return to the UK to challenge the stripping of her citizenship in person.

She remains imprisoned in a camp in northern Syria.

In 2019, she told Sky News she was "just a housewife for the entire four years" she was with IS and claimed she "never did anything dangerous" or encouraged others to join.

Last year, in another Sky interview, she said she wanted to go on trial in the UK and invited British officials to question her in prison.

However, a succession of Conservative home secretaries have insisted she is a potential danger and should not be allowed back in the UK.

Her lawyer, Tasnime Akunjee, previously said in a statement that "one of the main arguments will be that when former home secretary Sajid Javid stripped Shamima Begum of her citizenship leaving her in Syria, he did not consider that she was a victim of trafficking".

"The UK has international obligations as to how we view a trafficked person and what culpability we prescribed to them for their actions," Mr Akunjee added.

The other girls who left for Syria with Ms Begum, Kadiza Sultana and Amira Abase, are believed to be dead.