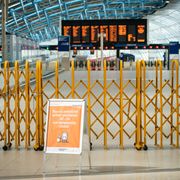 The boss of the rail workers’ union has insisted he’s "not the Grinch" as he announced four 48-hour strikes over the Christmas and New Year period.

RMT General Secretary Mick Lynch said there had been no improved offer on jobs, pay and conditions, so more walkouts would go ahead.

About 40,000 staff from Network Rail and 14 train companies are set to strike.

It means disruption for travellers, workers, and shoppers in the run-up to Christmas – and for people returning home after the festive break.

There could also be problems on other days because the RMT said on overtime ban would run from 18 December to 2 January.

"I’m not the Grinch, I’m a trade union official, and I’m determined to get a deal," he said.

He accused the government of "directly interfering" in negotiations and said the last two weeks of talks with Network Rail had not achieved a breakthrough.

The Christmas action will be the latest in a series of rail strikes that began in June and follows RMT members last week voting to continue striking for another six months.

Train drivers who belong to the Aslef union are staging a separate strike this Saturday, hitting services run by 11 operators, including Great Western and Southeastern.

Strikes planned for the start of November were previously cancelled by the RMT after it said it would enter a fortnight of "intensive negotiations".

But Mr Lynch said on Tuesday that a commitment from train companies to table a written offer at the end of those talks had not materialised.

Reacting to the new strikes, Network Rail’s chief negotiator stressed there was a "precarious financial hole" in the industry, which striking only made worse.

"Only through reform, that will not result in anyone losing their job, can savings be made that can then be converted into an improved offer," said Tim Shoveller.

"And while progress has been made over these last two weeks, we still have yet to find that breakthrough.

"We will not give-up and hope that the RMT will return to the table next week with a more realistic appreciation of the situation."

The prime minister’s spokesman said the strikes risked "putting the future of the rail industry in jeopardy", and called on the union to "come to an agreement that is fair to passengers, taxpayers, and workers".

The Rail Delivery Group, which represents train companies, said "the outline of a credible deal" had emerged in the latest talks.

However, it said the walkouts would disrupt people’s first "normal" festive season post-COVID and damage hospitality and retail businesses.

The rail strikes are perhaps the most high profile among a wave of recent industrial action. Other sectors taking or considering strikes include postal workers, nurses and civil servants.