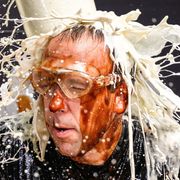 The prime minister has suggested that Matt Hancock’s appearance on I’m A Celebrity is not "noble" because the former health secretary is failing to prioritise his "constituents and our country".

Rishi Sunak also said he was "disappointed" when Mr Hancock signed up for I’m A Celebrity… Get Me Out Of Here! because politicians should be focused on tackling the issues facing the country.

The prime minister was asked if Mr Hancock’s appearance on the ITV show, where he has taken part in six publicly-voted trials, denigrates politics.

"I think politics at its best can and should be actually quite noble," he told reporters travelling with him to the G20 summit in Bali.

"You have to earn people’s respect, right. It is not given just because you are a politician…

"It is incumbent on all members of parliament to do the things that earn people’s respect and that’s serving your constituents really well, making a difference to them in surgeries.

"It is how you conduct yourself – everyone is going to do it in a slightly different way – but I think it’s important that we have our constituents and our country and the forefront of what we do when we go around our day-to-day lives."

Read more: Could Matt Hancock actually win I’m A Celeb? It looks like he’s in with a chance…

It was put to Mr Sunak that his former cabinet colleague looks like he is asking the public to forgive him during his time in the Australian jungle.

Asked if Mr Hancock deserves their sympathy, Mr Sunak said: "I think the British public will make up their own mind.

"I was disappointed when he went on the show, as I said, and I thought the chief whip was right to suspend the whip from him."

MPs should be focused on "debating and trying to solve" the many challenges the UK faces, Mr Sunak added.

Asked if he has tuned into the show, watched by millions each night, he said: "Sadly not, no, I’ve been busy. I’ve barely seen my children, or anyone else for that matter, over the last couple of weeks."

Mr Sunak also said Mr Hancock’s future as an MP will be decided by the voters at the next election.

Asked whether Mr Hancock should quit Westminster, the prime minister told ITV News: "Matt Hancock is not a Conservative MP, the Chief Whip decided to remove the Conservative whip.

"Ultimately, the question is for his constituents at an election but I think it was right that the Chief Whip removed the conservative whip from Matt Hancock, it’s a decision I support and I was very disappointed that he decided to go on the show."