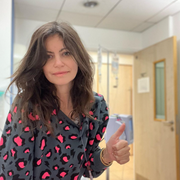 Podcast host Deborah James said she is "absolutely exhausted" and left "no stone unturned" as she receives end-of-life medical care for bowel cancer.

The much-loved presenter of the BBC podcast You, Me And The Big C was speaking from her parents’ house as her cancer fundraiser raised almost £3 million.

The 40-year-old campaigner told BBC Breakfast: "You know, I always said to you I don’t want to leave a stone unturned.

"I don’t think there is a stone that we haven’t tried to turn in order to make my liver work again, in order to kind of get my body functioning, but unfortunately I’m exhausted, I’m absolutely exhausted.

"We’ve got to the point now where I just… I know I can’t really do anything more."

On Monday, she said goodbye to her half-a-million Instagram followers and announced the Bowelbabe Fund, which has so far topped more than £2.8 million in donations.

The fund echoes the name she uses on her social media handle, Bowelbabe, and is raising money for Cancer Research UK.

The former deputy headteacher was diagnosed with bowel cancer in 2016 and since then has kept her more than 500,000 followers up to date with her treatments, with candid posts about her progress and diagnosis, including videos of her dancing her way through treatment.

The podcast host said she "always knew" she wanted to set up the fund before she died and, had she known what little time she had left, she would have set it up six months ago.

The money will be used to fund some of the things that helped her life, such as innovative drug studies.

Speaking about her family, the mother-of-two said: "I have a really loving family who I adore and couldn’t… I honestly, like… they’re just incredible.

"All I knew I wanted was to come here and be able to relax, knowing that everything was OK. We’ve had some really, really hard conversations in the last week.

"You think ‘Gosh, how can anybody have those conversations?’ and then you just… you find yourself in the middle of them, and people are very nice but you’re almost… you’re talking about your own death, and I’ve had five years to prepare for my death.

She continued: "I know, because I trust my husband, he’s just the most wonderful man, and so is my family, and I know that my kids are going to be more than looked after and surrounded by love and you always want to know as a mother are your kids going to be OK?

"And my kids are going to be fine, but it doesn’t mean that I’m not going to miss every chance that I could have had with them.

"I’ve been having sleepovers with my brother and my sister, we’re all in our 40s. You know I’m never alone, which I think is great. It’s like being kids again, and I can’t think of a better way to go."

Last six months of ‘the hardest’

James wrote her last column for The Sun on Tuesday in which she said: "The last six months have arguably been the hardest of my whole cancer journey."

She said the "unrelenting medicalisation" of her body has been "heartbreaking" and that her moments out of hospital and pain-free have become rarer.

She told The Times the COVID pandemic had been a "blessing" for the family: "How else would we have had two years of just being together with no distraction?

"I watched every moment of them growing up in our little bubble and that makes up (for) some of the years I will lose."

Professor David Cunningham, who has been James’ consultant at The Royal Marsden hospital, told BBC Breakfast: "Deborah has been a beacon of inspiration, hope and courage to many patients with cancer.

"She’s supported, personally, probably thousands, and reached many, many more than that through social media.

"And that’s, I think, the driver for this fantastic initiative to set up a research fund to support further cancer research."