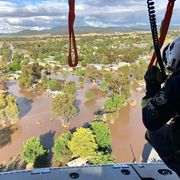 Hundreds of people have been rescued by helicopters and boats after flooding in the Australian state of New South Wales.

Heavy rain and thunderstorms hit parts of the state, some of which were still recovering from similar floods just days earlier.

Cowra, which is about 166 miles west of Sydney, got 121mm of rain in the 24 hours to Monday morning – the highest rainfall in 118 years, according to official data.

In the 48 hours to Monday morning, there was 165mm at Tuena in Southern Tablelands, 127mm at Forbes Airport, and 118mm at Orange, while in neighbouring Victoria, Mount Hotham received 144mm and Tallandoon had 133mm.

The New South Wales State Emergency Service said it had performed 222 flood rescues and received 909 requests for help in the 24 hours to Tuesday morning.

This included around 150 people rescued on Monday from Eugowra and nearby Molong, 67 of them by the New South Wales Rural Fire Service.

Many of those rescued had been clinging to trees or sitting on rooftops.

"The velocity was extremely fast – too fast in many cases to put boats in the water – hence the evacuations we performed yesterday with the 12 assets we had on hand via helicopter," he told Nine’s Today programme.

‘Lucky to be alive’

Libby Noble was near Eugowra and said her family farmhouse had been flooded to at least kitchen bench height.

She told The Sydney Morning Herald that the farm was left completely underwater, while her 85-year-old mother-in-law was in the family home when it was washed away.

"The house was picked up and washed back there with my mother-in-law inside it," she told the newspaper.

"She is very lucky to be alive.

"Sure, Eugowra does flood, but never like this, and never in these areas."

‘I was hanging on for dear life’

Her mother-in-law told ABC: "I was ringing (emergency number) 000 and the water was getting higher and higher, and then I had to stand on a chair to get out of the water, and I was there for hours.

"I was looking out the window and no one came.

"Eventually, I saw a couple of men wading through the water where it was the road and I banged on the window and yelled, and they saw me, and they came down and got me out.

"It was freezing cold because I’d been standing there for hours.

"I didn’t have much time to think.

"I was hanging on for dear life and hoping for the best and I thought this is it."

Second flood in as many weeks

Forbes, about 270 miles west of Sydney, is battling its second flood in as many weeks, with the Lachlan River expected to reach 10.8 metres – levels not seen since flooding in 1952.

Evacuation orders had to be brought forward by two hours after flood water rose more quickly than expected.

About 600 properties in the town – which has a population of around 8,000 – are likely to be inundated.

Mayor Phyllis Miller told the Australian Broadcasting Corp: "They can’t believe this could happen twice in such a short period of time.

"I’m an optimist in my life, but this is really heartbreaking."

New South Wales Premier Dominic Perrottet said the federal government will deploy an additional 100 defence personnel to help in what is the biggest flood rescue operation in the state’s history.

Volunteers have arrived from New Zealand and the state has also asked for help from the US and Singapore, he added.